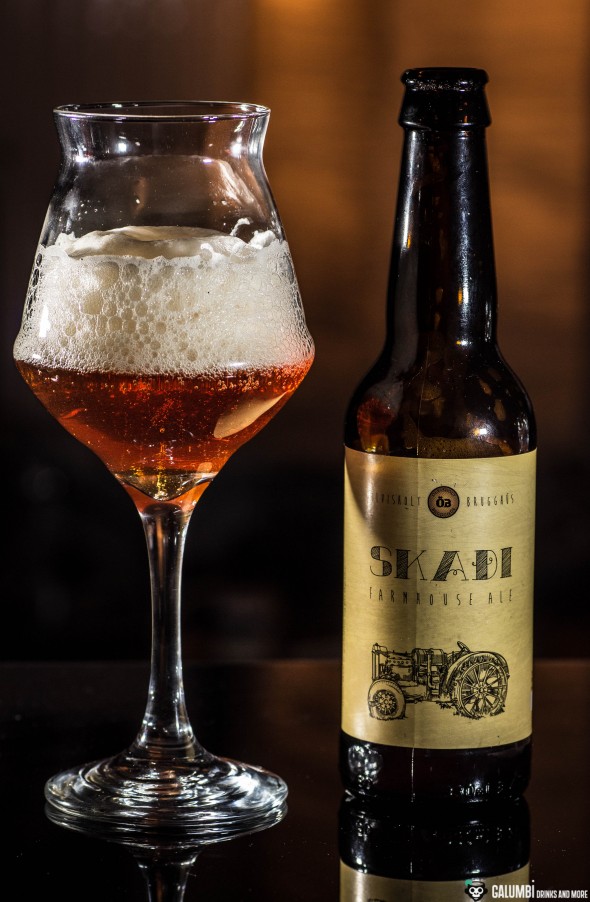 Farmhouse Ales or Saisons enjoy an ever-growing increase in popularity since lately, which is not a great miracle in my opinion because the Saison brewing style usually appeals to the taste of a wide audience, where one or the other IPA-hop-grenade still may be too difficult. Today’s article is about a very special FARMHOUS Ale, which comes from a place most people won’t for sure associate with beer; but nonetheless it is a place which is evolving more and more into small but distinguished beer nation: Iceland.

What exactly a Farmhouse Ale or a Saison is, I have already described in the context of another beer, so I do not want to go further into characterization of the brewing style at this point. Instead, the Skadi Farmhouse Ale stands in the foreground. It comes from a small Icelandic brewery with the sonorous name Ölvisholt Brugghús in the south of the country. In former times it has been a small dairy farm which fits into the picturesque Icelandic landscape.

Named after the Norse goddess Skadi, the goddess of hunting and winter, the brewing process of the Skadi Farmhouse Ale turns out to be an interesting one due to some nice and also unlikely ingredients used: Pilsner malt, rye malt, wheat malt and dark caramel malt are accompanied by the Slovenian aroma hop Celeia and the English hop East Kent Goldings. Also some brown sugar is added and – as a special ingredient – Icelandic angelica finds its way into the beer. This recipe promises an interesting taste compared to other Farmhouse Ales.

The red-colored Skadi comes with 7.5% vol. and therefor turns out to be quite strong.

On the nose you’ll find interesting notes of malt and yeast in combination with the typical floral tones of a Saison beer. In addition, there is also some caramel. Although I tried, I could not scent the Icelandic Angelica as an outstanding or isolated component; instead it seems to harmoniously merge into the floral tones of the beer.

In terms of taste the Skadi Farmhouse Ale is a very aromatic one: A lot of caramel with an appropriate sweetness (the addition of sugar is clearly noticeable), roasted aromas and also the floral tones from the nose. Together, these flavor components blend perfectly and even though I’m really not a fan of sweetened beer, the Skadi Farmhouse Ale tastes really excellent.

Buying sources: This is not an easy one to get your hands on. In specialized stores you might be lucky to find it, otherwise you will have to watch out for it on the internet.