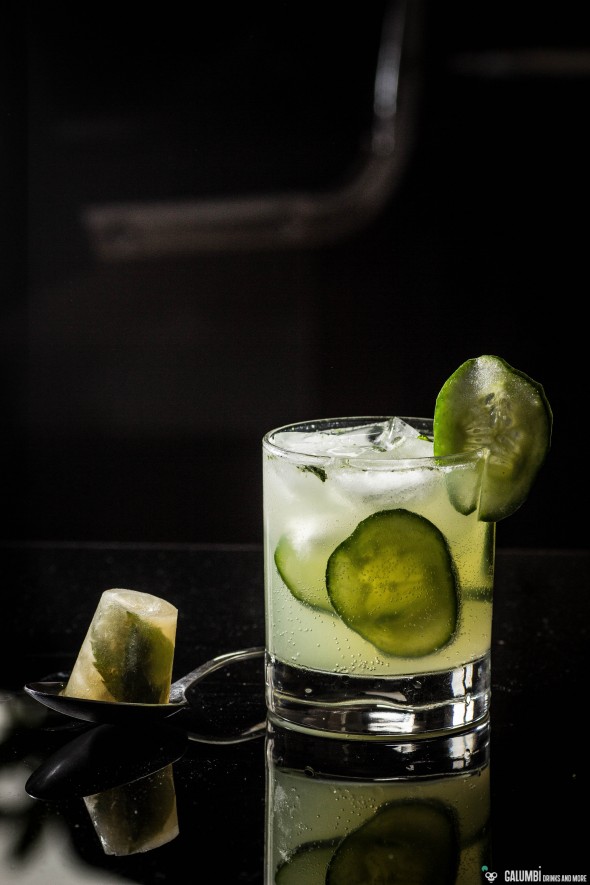 When it starts to become really warm und summery outside, there is hardly anything better than a really refreshing cocktail. So today I want to introduce such a drink: the Cucumber Cooler. Coolers are a classic cocktail category, which is not quite as simple to define. Commonly they consist of soda or other carbonated “fillers” such as tonic water or ginger ale and are flavored with a spirit and sometimes additional herbs or fruits. The transitions to Fizzes and Collins are fluent and a strict demarcation is not really possible. To make matters worse, in some English-speaking regions people refer to alcopops as “coolers”.

In his “Recipes for Mixed Drinks” from 1917 Hugo R. Ensslin lists numerous variants of Coolers, which have only the principle of carbonated filler and a spirit in common. In some there are citrus juices, others rely on additional bitters while some are prepared with sodas, others with ginger beer.

The Cucumber Cooler however is, as the name suggests, features the flavors of cucumber, but also mint and the floral and herbal tones of a quality gin alongside fresh lime juice. It turns out to a little bit more citrus based with herbal notes than for example the somehow similar „The one we use to drink on Sundays” does. The taste is nonetheless quite closely related. While the latter is also a nice and refreshing summer drink, the Cucumber Cooler is – despite its name – a little less heavy on the cucumber side and thus perhaps also suitable for people who think dubiously of drinks on a  cucumber base. I have found the recipe on the Minimalist Baker blog and was very pleased with it, so I want to introduce it here in a slightly modified version.

Recipe (adapted from the recipe on Minimalist Baker; in US-typical ounces):

Preparation: First, put mint, lime and gin (and sugar, if used) into your shaker and gently muddle the ingredients. Then add the cucumber slices and shake vigorously on ice. Double strain into a glass filled with fresh ice. Last give the cucumbers slices, the mint leaves and the lime slices you repealed for garnish into the drink.

Suggestion: If you freeze this drink you’ll get very nice “Ice Pops” or “popsicles” (as you can see in the picture).

Buying Sources: All ingredients should be available in better-stocked supermarkets.

One thought on “Cucumber Cooler”