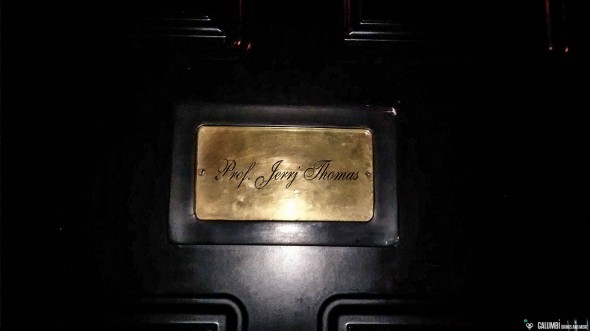 A few weeks in the forefront I decided to visit the Italian capital on the Easter weekend. It was not my first trip to Rome, but given the myriads of attractions and the full load of cultural history that’s descending upon you once you’ve entered the historical core, this city easily makes you feel like being here for the first time. However, my last visit already dates back a few years ago, so this time it went without saying that a little research in advance on the Roman bar scene would be necessary.

In this context my wife came upon the Jerry Thomas Project, a speakeasy in the little alley of Vicolo Cellini near the Tiber. The Jerry Thomas Project has been awarded best Italian Bar of the Year and also appears in the ranking of the world’s top 50 bars. It was named after Jerry Thomas, one of the godfathers of American bar culture, who among other things became famous for his legendary Blue Blazer. When visiting the website of the bar you will get a first impression of its atmosphere. It relies on a mix of speakeasy-typical seclusion, understatement and classicism on a quite high level. You won’t learn anything about the interior or the drinks served there, but you do find yourself confronted with a password question that will be asked in front of the inlet – also typical for a speakeasy.

While walking through the orange grove on the Aventine Hill, we tried to get a telephone reservation for a visit on the evening of Holy Thursday. First, however, I was forced to do a fairly extensive online research, which was not so easy to do for me as a non-Italian; the password question on the website was definitely not the easiest one…even in times of google:  “What was the name for “Cocktails” used by the Italian Futurist Movement in the 1930’s?”

However, the research was quite interesting because I learned a lot of interesting things about this Futurist Movement. All in all an illustrious movement with bizarre (although partly nationalistic) thoughts about a revolution of classical serving styles of food and food in general. However, I don’t want to submit any historical treatise at this point; who might be interested in this matter should go for some research on her or his own. Anyway, the right answer was “Polibibita” (although we finally did not need it at the door).
We made a reservation for 22 o’clock and left the hotel timely. As the taxi ride was unexpectedly quick, we arrived about half an hour too early in the Vicolo Cellini, probably matching every bad cliché about German “Pünktlichkeit” (timeliness). However, first of all we had to find the entrance. The Jerry Thomas Project is inconspicuously hidden behind a dark door with a golden sign on it. After we rang the bell a friendly bartender greeted us through a small slot in the door and informed us that the store had not even opened.

Amused by our own stereotype we had a glass of white wine at a wine shop around the corner and came back again at 22.10 o’clock. This time ten minutes late intentionally. Of course we were still the first. J

The Jerry Thomas Project is like a journey back to the Chicago of the twenties. But with some Italian element however: Dark wallpaper and tapestry is framing a soft lighted space which is decorated with lots of curious objects and much attention to detail. We were placed in a cozy corner booth and studied the fairly comprehensive bar menu, stocked with many classics and signature drinks. 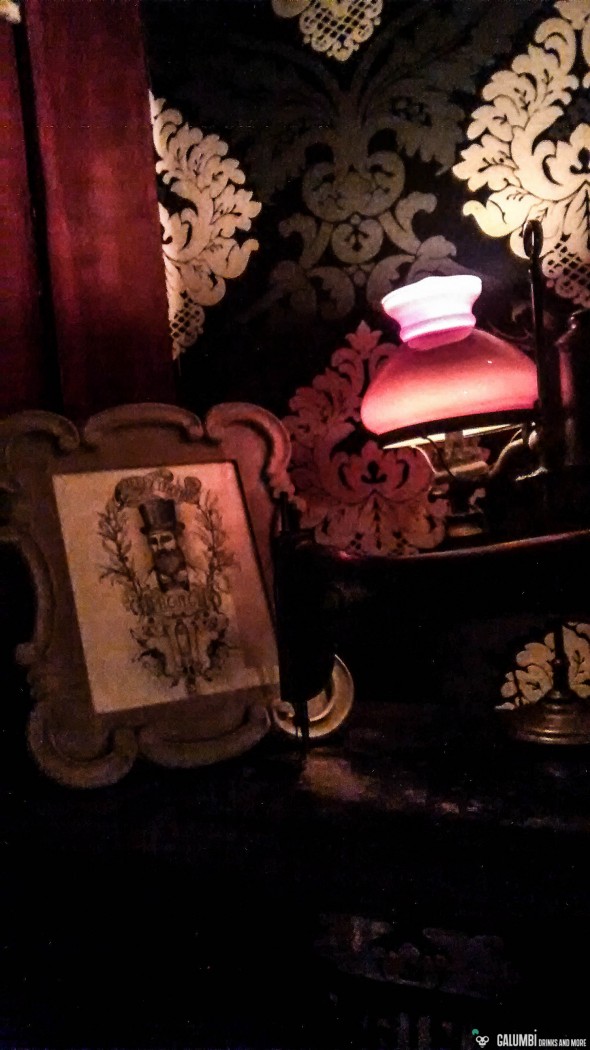 Since I cannot give an exact list of ingredients of every drink we had (because I did not want to take any pictures of the menu due to not dishonoring the atmosphere of the place) I refrain at this point from enumerating every drink we had. But I must highlight one special drink my wife had, it was a very aromatic rum-based flip, which was even outstanding from the other excellent drinks. It had the creaminess of a flip, but at the same time tasted fresh and lively and was rounded up perfectly with interesting spice notes. Perhaps the best flip I have ever tasted. 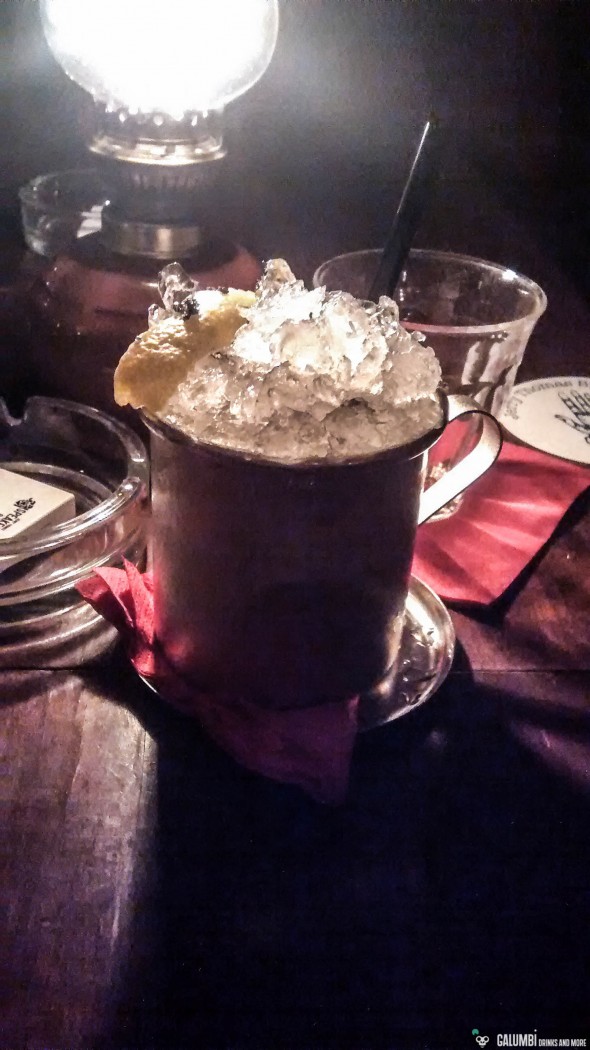 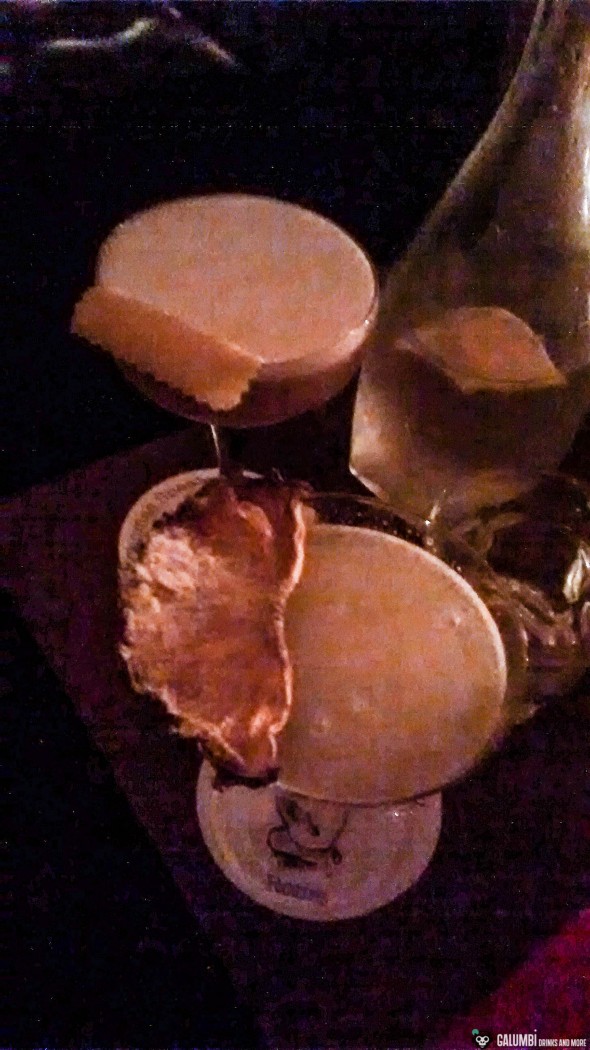 We spent almost four hours at the Jerry Thomas Project enjoying really excellent cocktails and atmosphere (the drinks are between 10 and 15 euros, that’s not too much especially for Rome standards) and would definitely have stayed longer. But since too much alcohol is not a good idea, we let it be.

For some nice impressions of the Jerry Thomas Projects, I highly recommend to give this video a try:

The Jerry Thomas Project is an awesome experience. We will love to come back one day.

(Pictures were taken with a mobile phone without flash.)