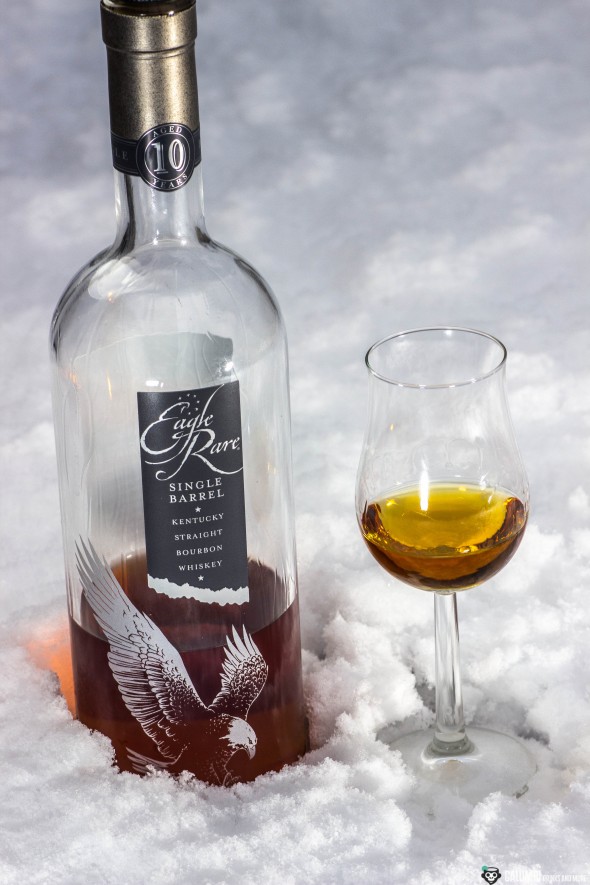 The American Bald Eagle flies through the air and swoops down on its prey – the design of the 10-year-old Eagle Rare Kentucky Straight Bourbon is a quite patriotic one, although I have to admit that this bourbon stands out in a positive way due to the really nice shape of the bottle. We’re dealing  with a very high quality: the bottle has a nice heavy bottom and there are no big labels on it so you have a perfect view on the liquid inside.

The Eagle Rare Bourbon has the proud age of ten years what’s actually quite rare. Numerous Bourbons appear on the market at a much younger age (respectively with no age named on the label). Of course they have to mature for a minimum of 3 years but if you compare that to an average Single Malt Scotch Whisky that isn’t really much. So the ten years of age do not necessarily guarantee an outstanding whiskey, but very often it is indeed a good indication.

But now lets have a closer look at the Eagle Rare. I can bluntly say: It is an excellent bourbon! Anyone who loves this kind of whiskey will enjoy this matured distillate. The Eagle Rare is a well balanced whiskey and brings a full cargo of flavors with it. The American white oak (which is required for maturation by law) leaves its mark after ten years in the barrel. The Whiskey also carries really delicate vanilla, honey and subtle wood notes.

In short: a really excellent whiskey!