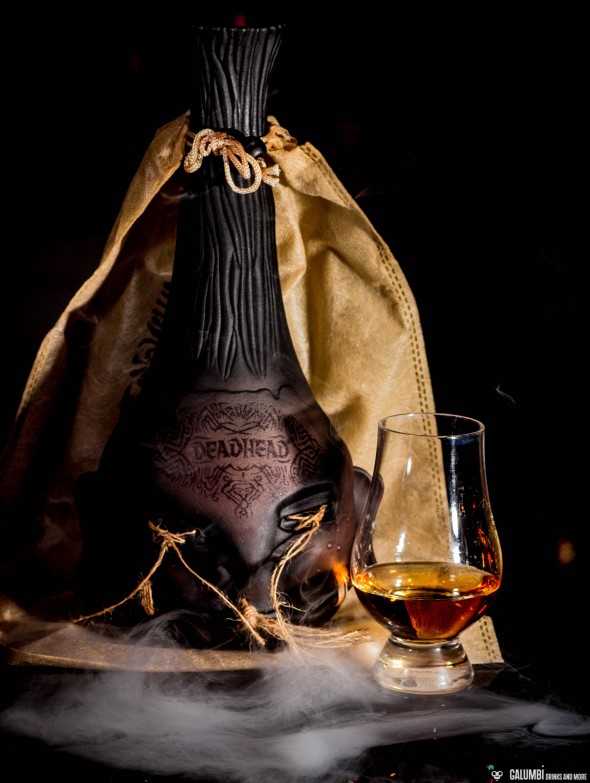 Let´s talk about a pretty creepy spirit today: The Deadhead Rum from Mexico. Don´t worry: Not the quality is the creepy thing, but the appearance of the very eye-catching bottle that resembles a skull or a mummy. The bottle design is obviously a marketing gimmick, which is however not quite as pointless as it might appear first: In Mexico skulls do have a very large and sometimes even colorful tradition.
Unlike in the Aztec past with its sometimes bloody dark cult and ritual elements, the skull has gone into a folkloric symbiosis with the deep-rooted religiosity of many people in mexico. The Día de los Muertos is a very important commemorative holiday in honor of the dead. The customs of that day vary regionally. Skulls and skeletons are found almost everywhere in various forms and colours and even with floral decorations. The design of the Dead Head rum fully relies on the very eye-catching effect of this death decorations.

In a way you could say the bottle design is programmatic for the rum, because you won´t taste the typical sweetness you might be used to traditional rums, but a rather bitter-spicy distillate which shows its six years of maturing in old cognac, whiskey, sherry or Bordeaux barrels.

Moreover, the Deadhead is a blend of Melasserum and rum from sugar cane juice (like the Rhum Agricole) which is finally responsible for a certain freshness and liveliness.

Taste: Again, you can feel the sugar cane rum that mingles with flavours of molasses. Spicy, earthy, pungent (a little immature fruit) with rather weak sweetness; Moreover, associations of light smoke