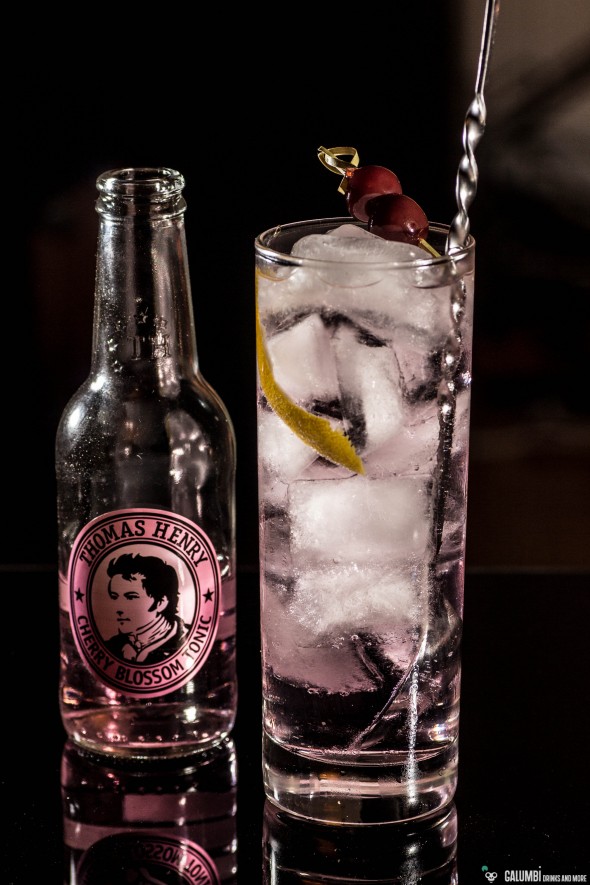 I must confess: Thomas Henry has actually convinced me of their products. The Tonic Water of the brand has become one of my favorite standard tonics, while I also appreciate the varieties Spicy Ginger and Ginger Ale very much for use in many highball cocktails. In my opinion it is also no wonder that their Elderflower Tonic has conquered a place in the repertoire of many bars. In September 2014 Thomas Henry announced an extension of its product range build up by three new flavors. These include the very interesting Cherry Blossom Tonic, the mango lemonade Mystic Mango and the grapefruit lemonade Ultimate grapefruit.

Since my interest was aroused immediately, I applied for a package of testing bottles that were sent home to me per post. In the package they also send a small card of recipes with suggestions for their new products: Three highball cocktails were proposed.

So, on the fly I tried them out one by one:

The recipe for Pink Ink:

I chose a lemon zest and two Griottines cherries as a garnish. The lemon zest emphasizes the fresh touch of Tonic (lime would not go well with the light cherry tones) and the cherries compliment the fruit aspect very fine.

The result has definitely convinced me: Of course we’re handling with a slightly sweeter version of the Tonic, but if you can arrange with that it works really well with the gin. To avaiod experimenting I used a Bombay Sapphire Gin because I wanted to prevent the gin from covering the tonic too much. The cherry notes really work well in combination with the bitterness of the tonic and the juniper-botanical gin aromas. Maybe this variant of the classic gin & tonic can appeal also to those who never really fell in love with the original version due to the bitterness of the drink. While the Pink Ink still has bitter notes, they are lightened up a little bit by the sweetness and fruitiness of Thomas Henry’s new Tonic Water.

The next drink also sounded very promising to me: Thomas Henry fields their own version of the Paloma cocktail, which has been specifically designed for the new Ultimate grapefruit lemonade. Since I like like the Paloma cocktail, I could already imagine I’d like this one, too. 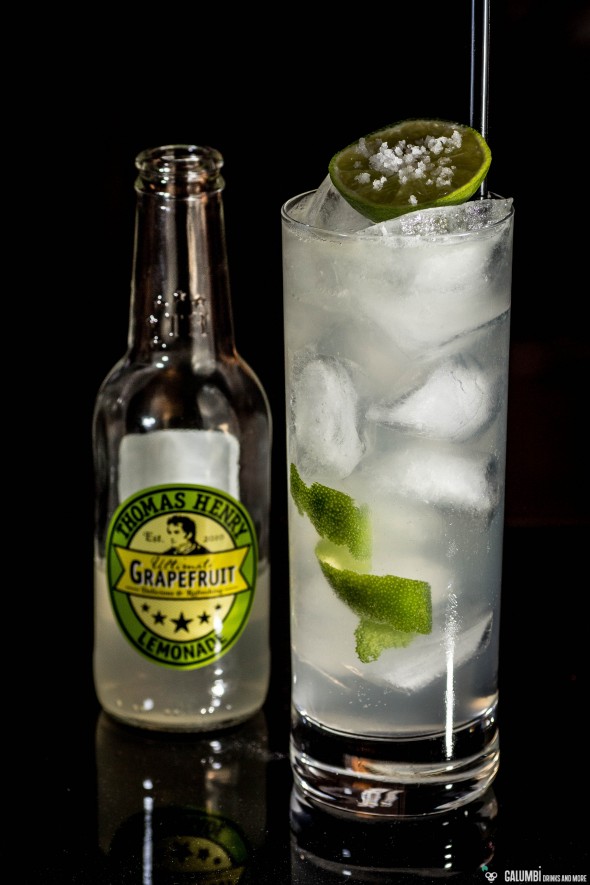 The recipe for Paloma:

The recipe didn’t become concrete on how to use the salt. While many traditional variants of the Paloma use salted rims on the glass, I decided to rely on a a pinch of fleur de sel, I’ve added to the drink. I think that a little salty touch adds a more round finish to the overall taste. Like most people will probably know from many contexts, the salty taste of most people is quite subjective. To take this into account, I recommend using the lower third of a lime, sprinkling it with another pinch of fleur de sel and putting it on the topmost ice layer of the drink.

This not only looks nice when you serve the drink, but everyone can re-adjust the salt and lime to personal taste.

The result was really appealing! A fine acidity of the lemonade blends very well with the earthiness of Tequila and the Fleur de Sel. It’s a flavorful and very interesting counterpoint to the sweetness of Ultimate grapefruit.

So the last drink was made up with the new Mystic Mango flavor. The very name promises fresh, exotic and Caribbean feelings, which are also reflected in the proposed Highball Recipe, the Mango & Spice: 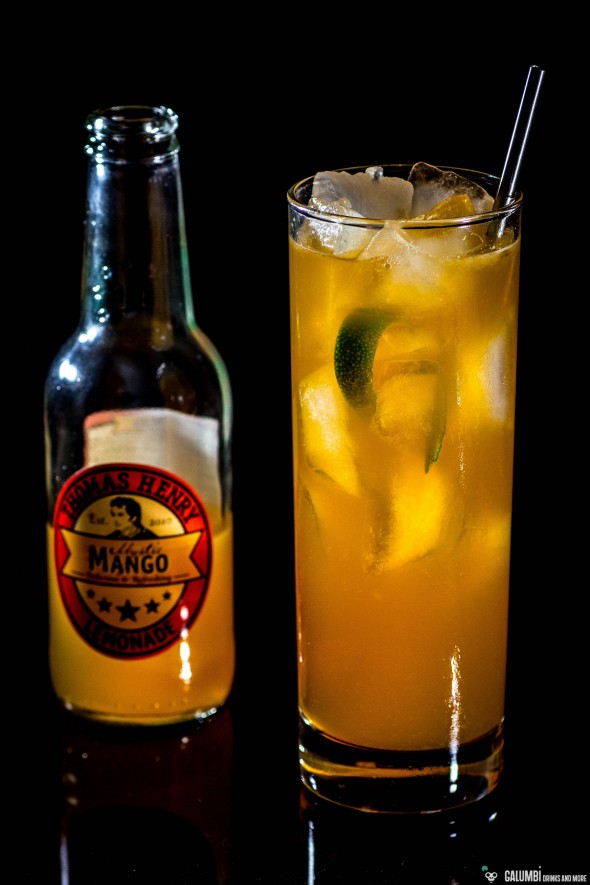 The third and final cocktail-suggestion of Thomas Henry is most likely something like a “new creation”. While the Paloma is a relatively sophisticated long drink with a Mexican reminiscence and the Pink Ink is virtually a variant of the Gin & Tonic, the “Mango & Spice” is rather a simple long drink made of rum and the Mystic Mango lemonade.

The recipe for Mango & Spice is:

When mixing this drink I have slightly deviated from the recipe and have replaced the Spiced Rum by Myers’s Dark Rum. The relatively sweet mango lemonade seemed to demand a somewhat stronger counterpoint and the interaction with the strong caramel-spice notes of Myers’s work really good. Sprayed with a lime zest it went really nice. The Mango & Spice Highball however surely is way better while lying on a Caribbean beach than in the pre-Christmas period, in which I have tried the drink.

Of course I can imagine it with spiced rum, too but somehow that day I longed for a stronger rum. That might really have been because I was not on that Caribbean beach but in my flat on a ** *** cold winters day. The result nonetheless was very delicious: exotic and sweet mango with fine sparkling freshness meets full-bodied rum and the acidity of the lime. A caribbean-wintry experience.

With their three new products Thomas Henry has once again managed to please me. All three versions convinced me in the segment in which they were fielded. Although summer is still far away, every now and then you have to put yourself into a sunny mood. Thomas Henry’s new flavors can definitely help you with that.

2 thoughts on “Thomas Henry’s new flavors on the block…”