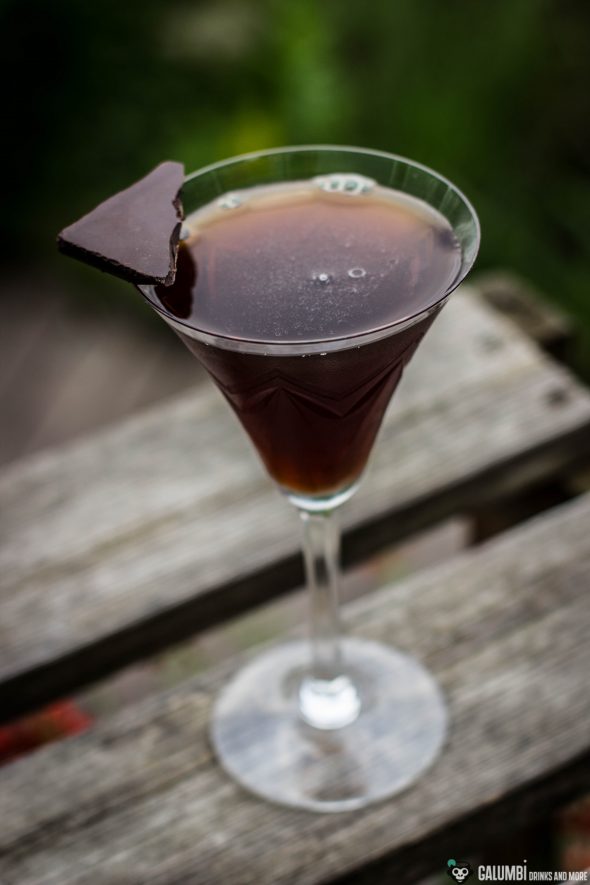 A few months ago, I followed a wide-ranging blind tasting of various coffee liqueurs in a German online community (cocktailnerds.de) with a lot of interest, in which several testers (including some fellow bloggers) scored various coffee liqueurs without any knowledge of what they had there in the glass. Their results were ultimately recorded in a point system and the result was finally published. In third place and thus part of the leading group: the Herencia de Plata Licor de Café. And a review bottle of precisely that liqueur finally found its way to my mailbox a few weeks later and stands now – ready for review – in front of me on the table. (provided test product)*

In this context, by the way, I would like to refer to a really nice article by my colleague Helmut Barro, who himself was part of the blind tasters and in his article also reflects the very interesting aspect of subjective fluctuations in perception when tasting spirits in his usual, differentiated manner. (only in German language!) Ah, if you are interested in the results of the mentioned blind tasting, you can finde the results here. 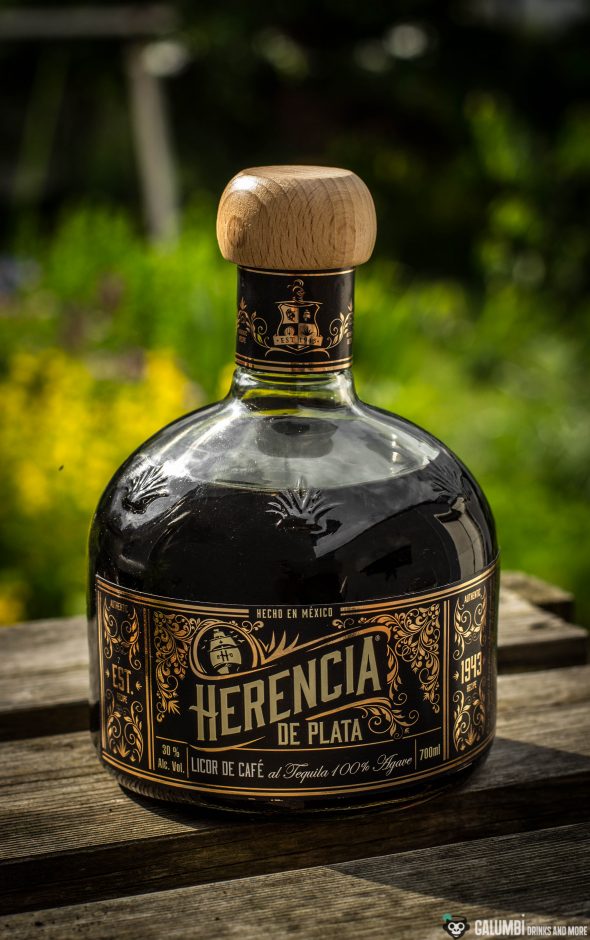 But what is Herencia de Plata Licor de Café? The name Herencia de Plata is probably familiar to the spirits lover as the producer of tequila. And indeed, in the case of the coffee liqueur we are talking about today, this is not entirely wrong. Herencia de Plata is a premium tequila range from the manufacturer “Tequilas del Señor”, which was founded in 1943 by Don Cesar García in Guadalajara and is still family-owned and operated under the management of Don Manuel García Villegas. For the Herencia de Plata Licor de Café, the Herencia de Plata 100% Agave Blanco Tequila has now been married with “a noble roast of the finest Mexican Arabica coffee beans”. The addition of “liqueur” in the name of the product, of course, tells us that here must be at least 100g of sweetening agents per liter according to European Union law. Furthermore, no flavorings, colorings, preservatives or genetically modified ingredients are used. Oh, and by the way we are dealing with an abv of 30% here. So far, so good.

Aroma: The nose turns out to be very exciting. The Herencia de Plata Licor de Café seems surprisingly sweet. This may sound strange for a liqueur, but since I’ve been tasting rather deliberately less sweet coffee liqueurs lately, the contrast is now striking. Still, the aroma is appealing with notes of milk chocolate and a subtle vanilla, associations of cinnamon, a subtle mineral note that I attribute to tequila, and even some salt.

Taste: The palate also shows a quite confident sweetness, but above all, the first surprise is the clear tequila characteristic of this liqueur, which I would not have expected at first in contrast with the nose and many other coffee liqueurs in my memory. Agave tones, white pepper, chocolate, again a nuance of cinnamon and aromatic roasted coffee combine to create a really nice and in this category really completely new picture (at least new to me). I can understand why this liqueur received so much acclaim in the blind tasting.

There is a drink named DaVinci Code by Matyas Busek, based on the famous book, in which cognac, port wine, coffee liqueur and a salted caramel syrup are combined. This drink is in itself already a very nice and successful digestif, but in this form was not quite what I wanted to do with the Herencia de Plata Licor de Café. However, it was – recognizably – the inspiration for what I poured into the mixing glass instead.

Instead of Cognac, I opted for an aged Rhum Agricole, simply because I like the particular aroma so much. Here my choice fell on the Clement VSOP, which is a really wonderful Agricole. Since I find the Herencia de Plata Licor de Café already sufficiently sweet in itself, no additional syrup had to hold out. Instead, I wanted to emphasize the chocolate tones of the Herencia de Plata Licor de Café a bit more and added – in addition to a fine pinch of salt – a tiny bit of Mozart Dark Chocolate. Coffee, chocolate, subtle spicy agave notes, aged sugar cane spirit and a touch of salt, that’s the Aztec Code (the Aztec Code is actually a 2D code, similar to the QR code – the name fits, of course, in that it links the Mexican home of the Herencia with the DaVince Code inspiration). 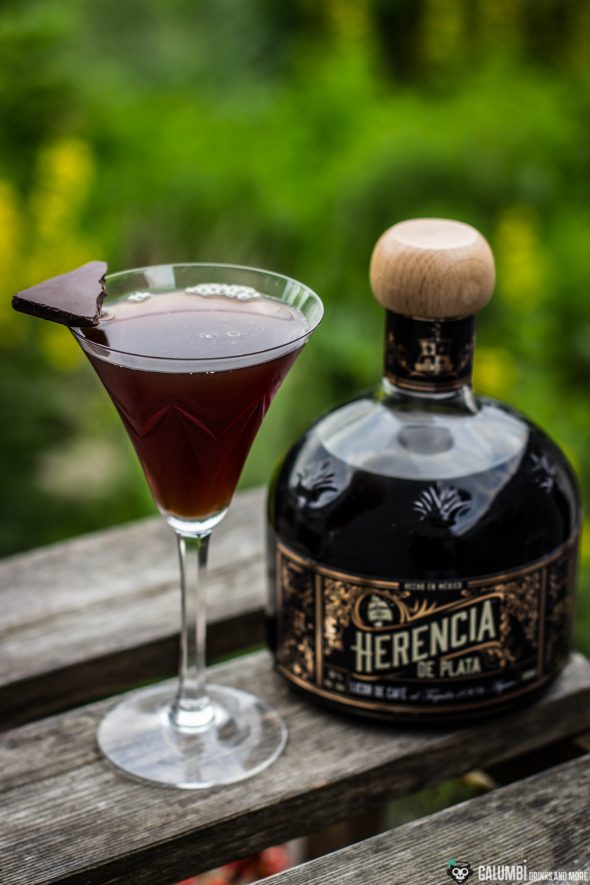 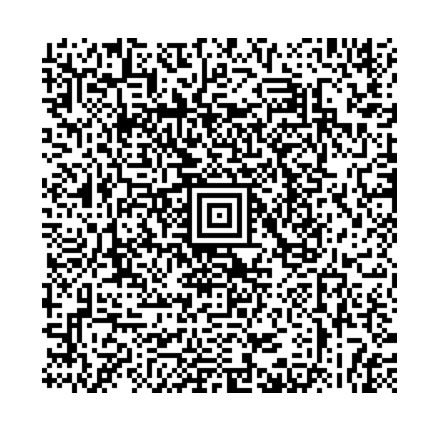 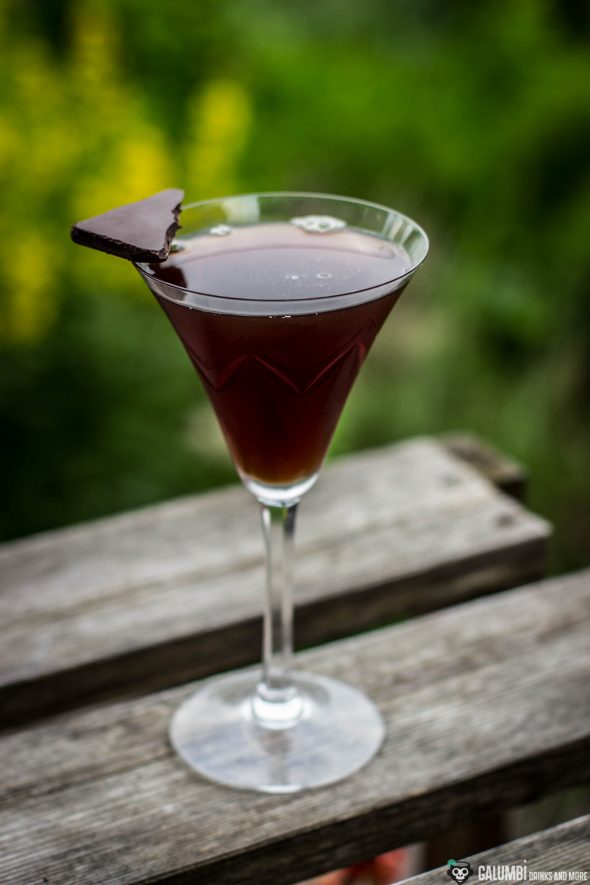 Salt solution: Shake 20g of salt with 80ml of water in an airtight container until the liquid has become clear and the salt has dissolved.

Preparation: Stir all ingredients in a mixing glass on ice until cold and strain into the pre-chilled glass.

Garnish: a piece of dark chocolate 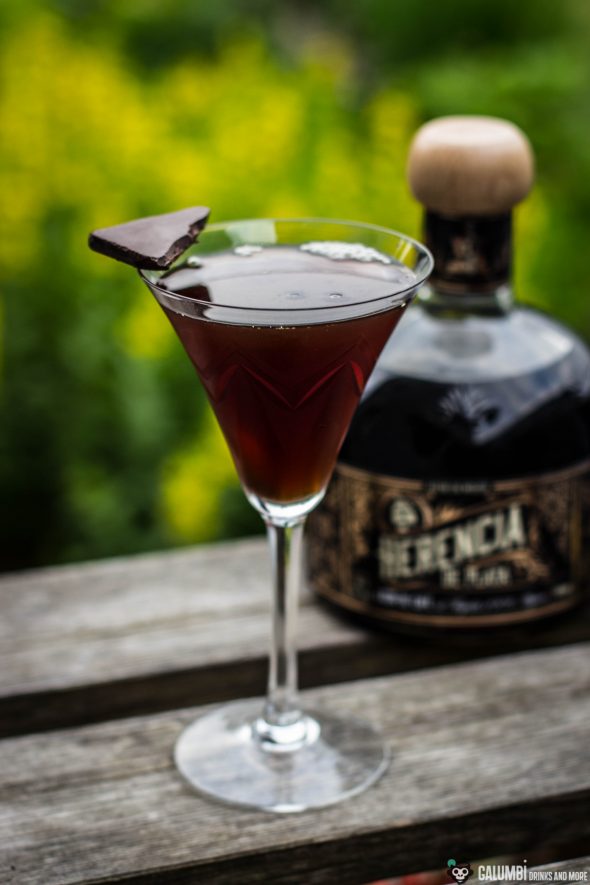