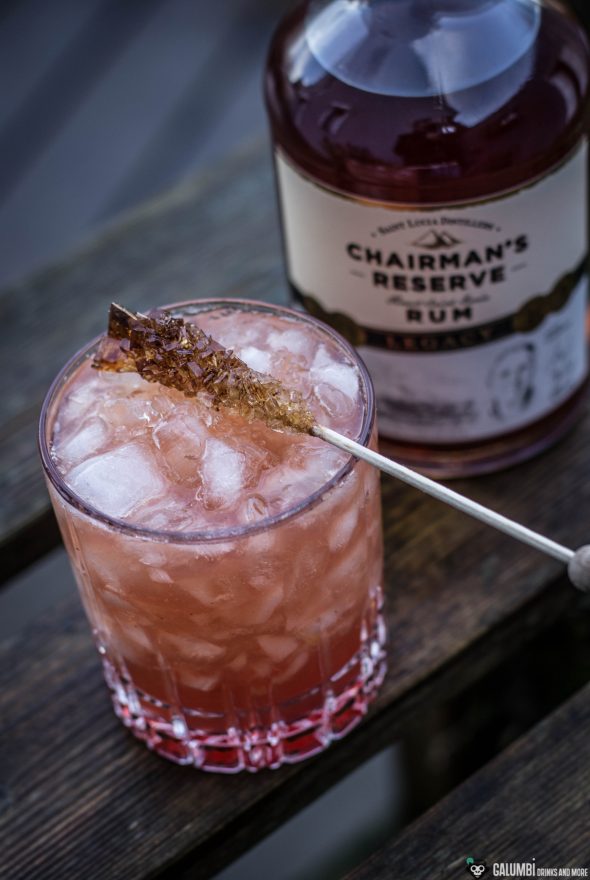 It is not without reason that Saint Lucia Distillers is always written in the plural. Even if the phrase “Saint Lucia Distillery” can also be found throughout the web, it is actually the Distillers, because it is a distillery merged of the two former distilleries Dennery Factory and Geest. The merging took place in 1972. Both distilleries had been in existence since the 1800s, or even before in the case of Geest Distillery. And if the name should sound familiar to readers of this blog, it may be because the Admiral Rodney Rum is also made there. (provided test product)*

Today, however, we are not talking about a new Admiral Rodney, but about a Chairman’s Reserve Rum, or more precisely the Chairman’s Reserve Legacy. This is an in-house blend that benefits from the distillery’s equipment of four different pot stills. These are the double retort still called John Dore 1 with a capacity of 450 liters, the John Dore 2, also a double retort still with a capacity of 6000 liters, the Vendôme, a hybrid pot still with rectification plates in the neck and a capacity of 1364 liters, and a Coffey column still. Now, however, not only four molasses rums of the respective pot stills are blended together, but in addition, an Agricole is produced on the John Dore 1 from sugar cane juice, whereby the sugar cane grows on the company’s own estate and is fermented with wild yeasts after harvesting. The individual distillates are then aged for between 5 and 7 years in ex-bourbon barrels before blending. I have to say: on paper, this all reads really, really well. Also when it comes to the price, the bottle of Chairman’s Reserve Legacy with its 43% vol. is available in the quite attractive range of mostly around 30 euros. 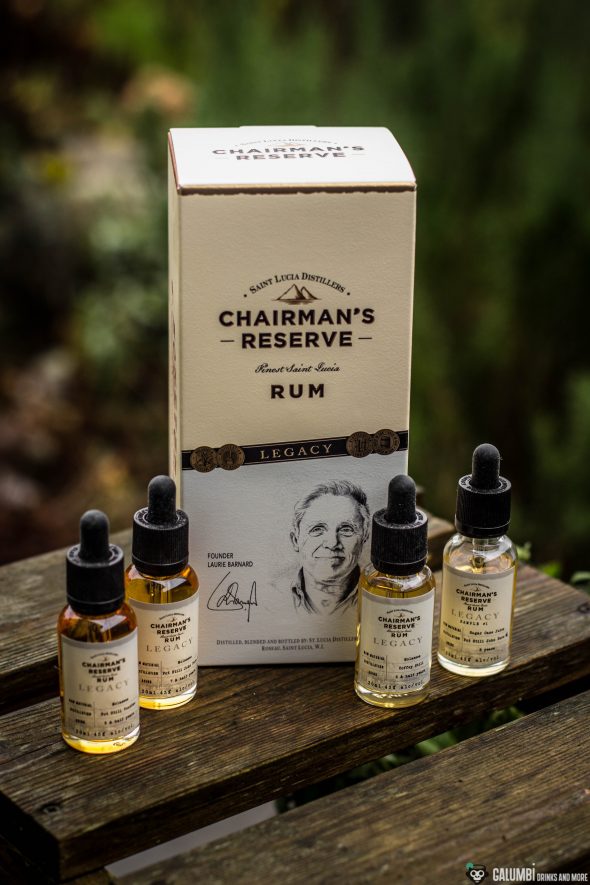 For me as a blogger, this review article also offered the really great opportunity to taste the individual components that make up the Chairman’s Reserve Legacy separately. So I had the chance to scent and taste the craft of blendmaster Laurie Barnard and to be able to understand what you cannot otherwise easily understand. The focus, however, should of course be on the Chairman’s Reserve Legacy itself – and I would like to start with the final tasting notes for this rum, followed by a few words on the breakdown into its individual components. 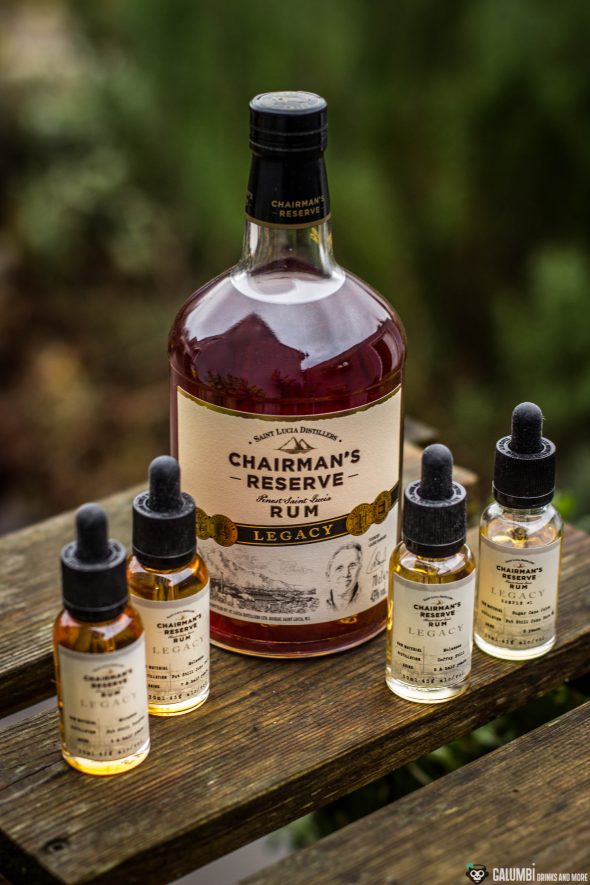 Aroma: I really like the nose already. It is by no means an overly pretentious distillate that’s only barely recognizable as rum. Instead it is a proper rum blend that comes up with a very successful aroma composition. I find notes of bright fruits, some coconut blossom sugar, bananas, but also dried fruits such as raisins and cranberries. In addition, a fine vanilla is present and a somewhat greenish note shimmers through remotely. I attribute the latter to the Agricole content, which I like very much here.

Taste: The 43% vol. is at no point (over)demanding or even pungent, the alcohol is well integrated. Again, dry fruits dominate at first, again some bright fruit (Mirabelle?) and vanilla. Then a very nice dry note shows up right away, contributing to a surprisingly rich body. Again, I suspect the Agricole component, but I’ll find out more about that in a moment. The official tasting notes speak of a “hot gingery mouthfeel”, which I can’t really detect here though.

First, I went for the molasses spirit from the Coffey Still, aged for five and a half years in ex-bourbon casks. This one surprised me on the nose with strong citrus notes and some cake batter. On the palate, it seems a bit pale in its own right, as expected, despite the 43% vol., but offers fruit notes and some banana.

The 7 year old molasses spirit from the John Dore still also has citrus notes, but with a much spicier character on the nose, almost tending towards a bergamot. It’s interesting on the palate as well, with notes of chamomile, honey bread and herbs – though as a final bottling, this would be a very unconventional rum.

The Vendôme molasses distillate, which is five and a half years old, also has a very distinctive character. It is already extremely exciting to get this insight into the blender’s craft here, because I would have actually never suspected that the combination of these rum samples can lead to the result described above. Again, citrus notes are present here (all the more surprising that I find none particularly pronounced in the final Chairman’s Reserve Legacy) and some lemon balm on the palate.

Finally, the five-year-old John Dore-Agricole made from sugar cane spirit follows. Things look different here: greenish woody notes, but also leathery aspects reminiscent of tobacco are present. On the palate, everything seems spicier, more concentrated. I already know why I like Rhum Agricoles so much. I’d buy this one straight up in that form.

The Chairman’s Reserve Legacy is a really nice rum, which should also please beginners who are looking for rum away from the sweetened top dogs on the broad market. Its price-performance ratio is really good, so from my side a clear recommendation!

Well, what can you do here in terms of cocktail? A whole lot! However, today I decided for a tiki drink. This may not be the first thing that comes to mind in December after the Christmas days, but in the end, conventions have always been irrelevant in the Tikigenre anyway. What’s allowed is what tastes good – and that’s what my interpretation of the Luau Grog does. The recipe is taken from Beachbum Berry’s Sippin’ Safari and slightly altered. The original uses Puerto Rican and Jamaican rums and a demerara. I opted for a slight shift here. The Chairman’s Reserve Legacy forms the base, and it is joined by the Plantation Single Cask Jamaica 9 Years finished in an Acacia cask and the Plantation Single Cask Fiji Island 2009 with a finish in the Kilchoman cask. Both rums are part of the new Plantation Single Cask series and work beautifully here. On that note, cheers! 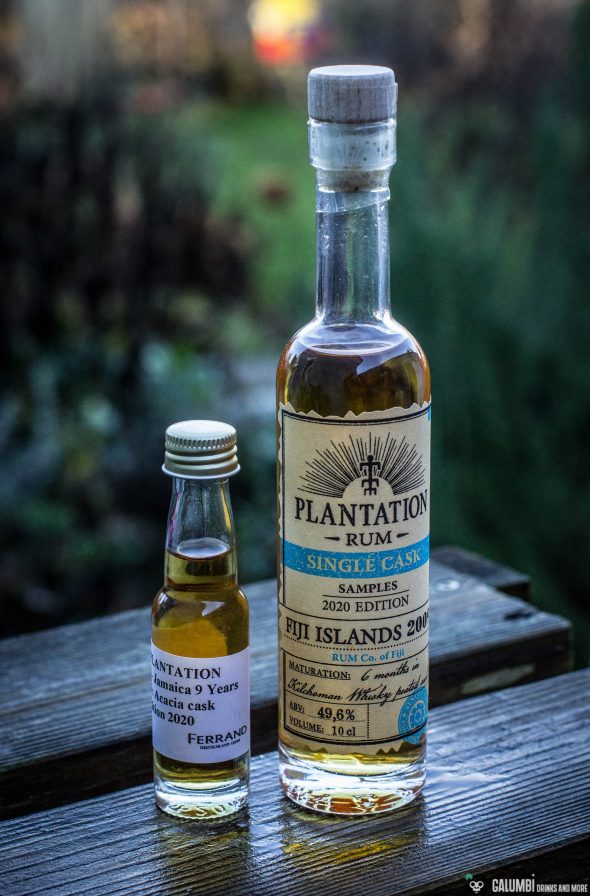 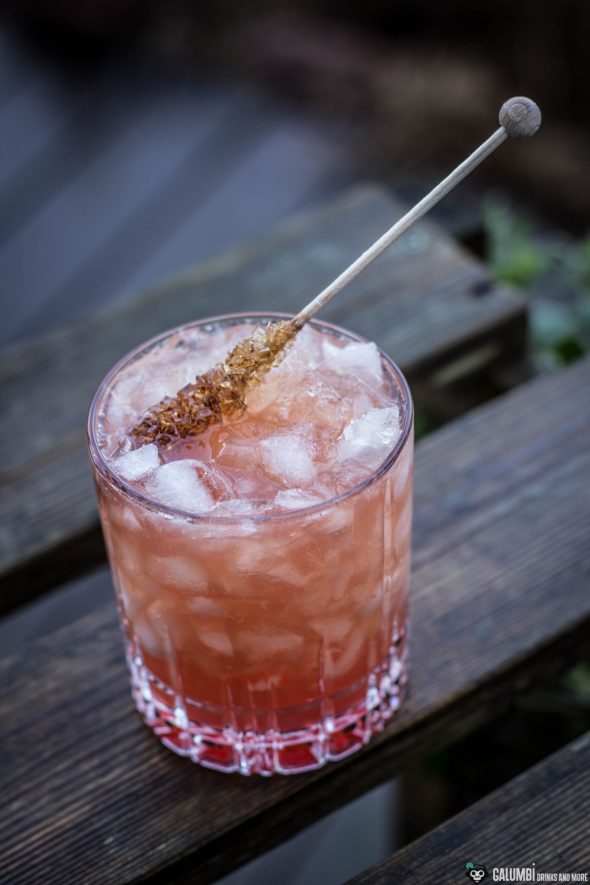 Garnish: rock sugar stick (in the original, a wooden stick with a frozen ice cone around it) 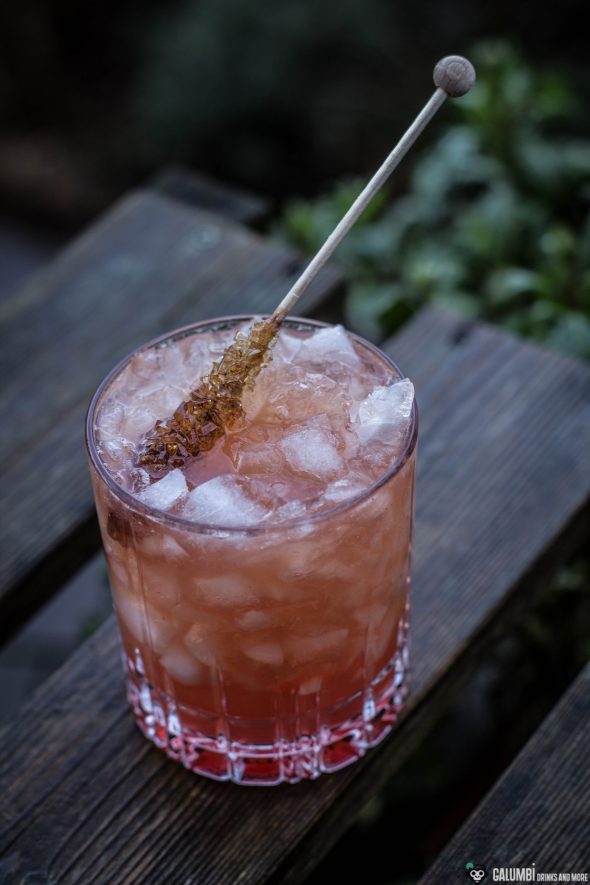