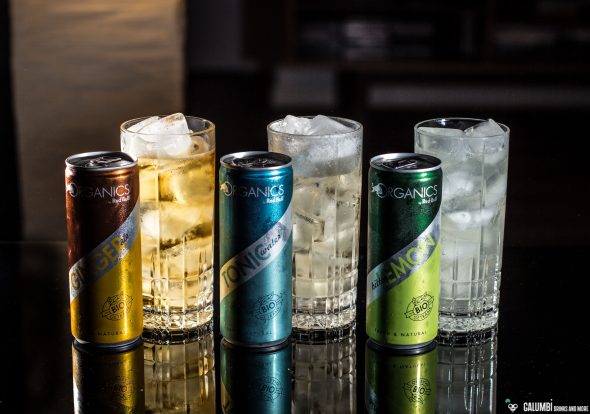 Today, as an exception, it is about some canned beverages here in the blog. However, I do not intend to expand my regular topics by reviewing soft drinks, but nonetheless I’d like to take a closer look at a series of much-noticed products today. The fact that it is currently very difficult to obtain them is all the more interesting. I’m talking about the new “Organics” series from Red Bull.

Admittedly, Red Bull is not necessarily a brand name that immediately comes to the mind in the context of sophisticated bar culture. Rather the energy drink-giant from Austria belongs to the area of ​​mass gastronomy. In the context of alcohol consumption, a “vodka-energy” will scarcely result in an overly enthusiastic reaction of any spirits or cocktail connoisseur. More likely you will witness a polite rejection and perhaps a compassionate smile. But this is very likely of no concern to the Austrian company from Fuschl am See, because economically the enormous amount of vodka-energy mixtures which is sold at clubs, bars and discos on the weekends will generate a profit a small cocktail bar or speak-easy can only dream of.

Nevertheless, the company of Red Bull is of course not completely blind to the developments happening on the markets and so in between they have discovered the segment of the so-called filler drinks. A few years ago, the Red Bull Cola was successfully established as an “organics” product on the market. For the time being, the three new beverages of that series this article is about are still in a testing phase and only available within a very limited framework. The beverage cans reviewed here are currently exclusively available in Austrian since the end of June 2017. I am lucky to be able to present them here because a friend of mine brought some of them from Austria. 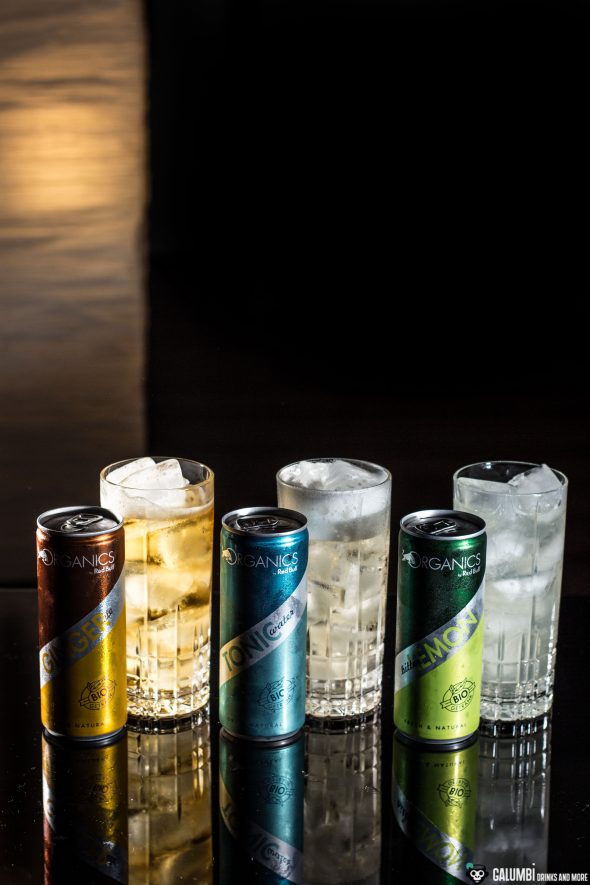 While the Red Bull-Cola is mainly the result of a stopped ceasefire between Red Bull and Coca Cola (Coca Cola launched their own energy drink called “Burn” in 2002), the new “Organics” cans aim specifically at the market for bar soft drinks respectively filler drinks. With a Tonic Water, a Ginger Ale and a Bitter Lemon, the classic three soft drinks most people know from the “Schweppes” brand were taken into the product range but with a focus on a more qualitative product. Finally, the term “organics” already refers – as also known from the Red Bull-Cola – to the use of natural ingredients. And also the taste differences (see below) clearly show that the use as fillers was clearly the center of considerations in that case. 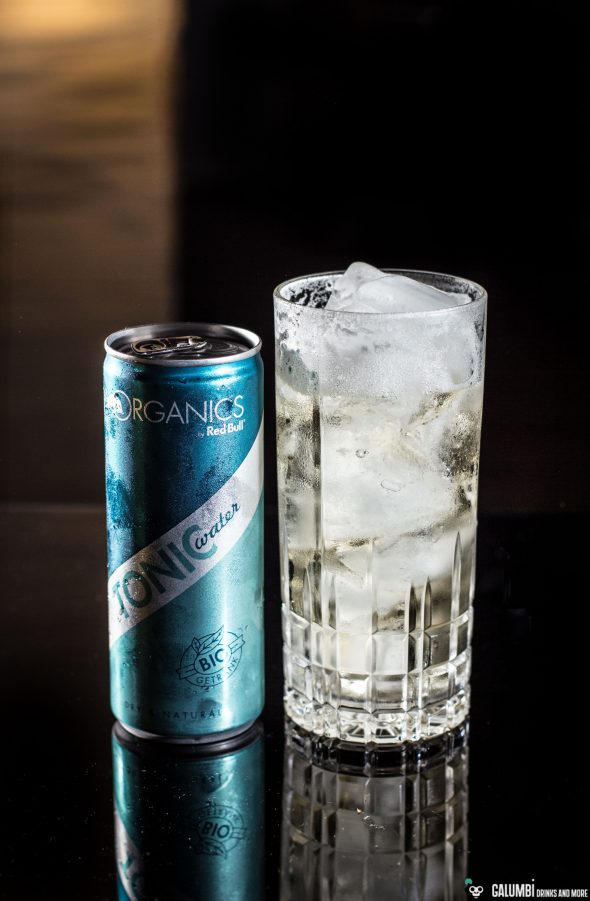 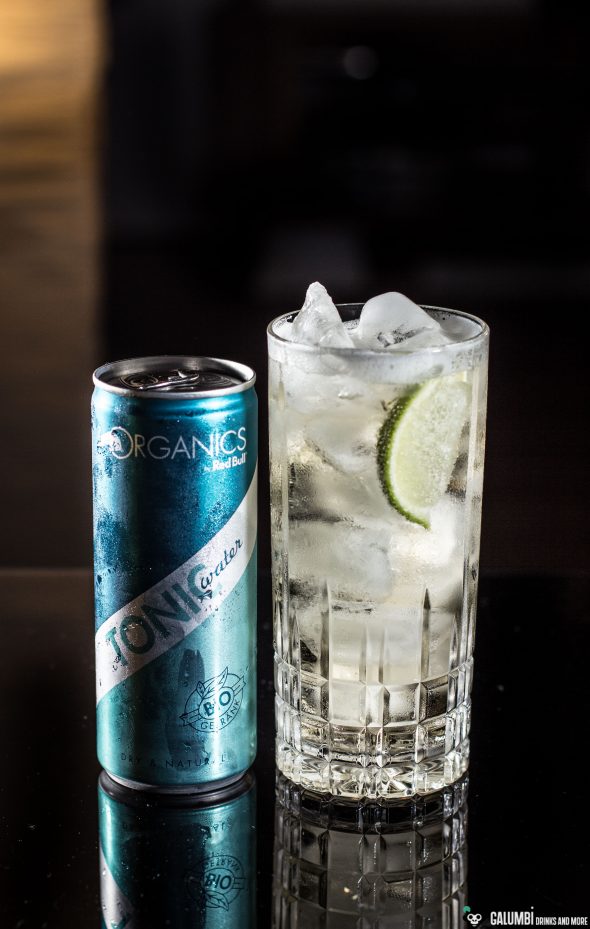 On the nose it can be recognized as a classic tonic water and a fine citrus note is noticeable. What is definitely unusual is the fine, yellowish color of the tonic water, which I think is caused by the lemon juice concentrate and the china-bark. Unlike other producers of tonic waters, Red Bull seems to abdicate color-filtering their product. For me that is a plus. It is immediately noticeable that you’re dealing with a clear, dry and very “straight” tonic water in your glass. It has fine notes of citrus fruits (lemon, lime, associations of blood oranges) and a very distinctive and beautiful bitter note. Clearly bitterer than most classical tonics, but not as bitter as a dry tonic. I really like the Red Bull Organics Tonic Water! In a Gin & Tonic I combined it with a classic Cotswolds Gin and found the result very appealing: clear, dry, crisp – just like I imagine a classic Gin & Tonic – a small lime slice: very nice, no question! 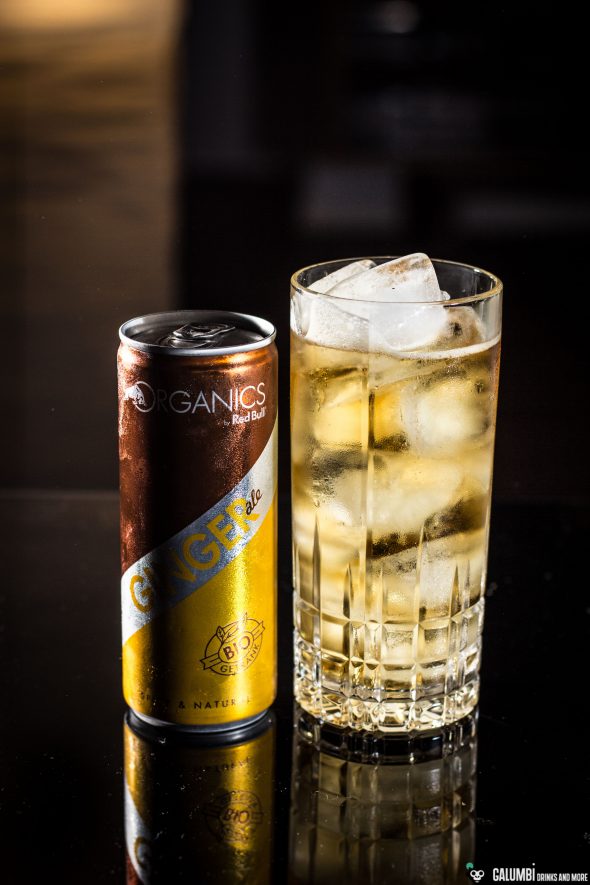 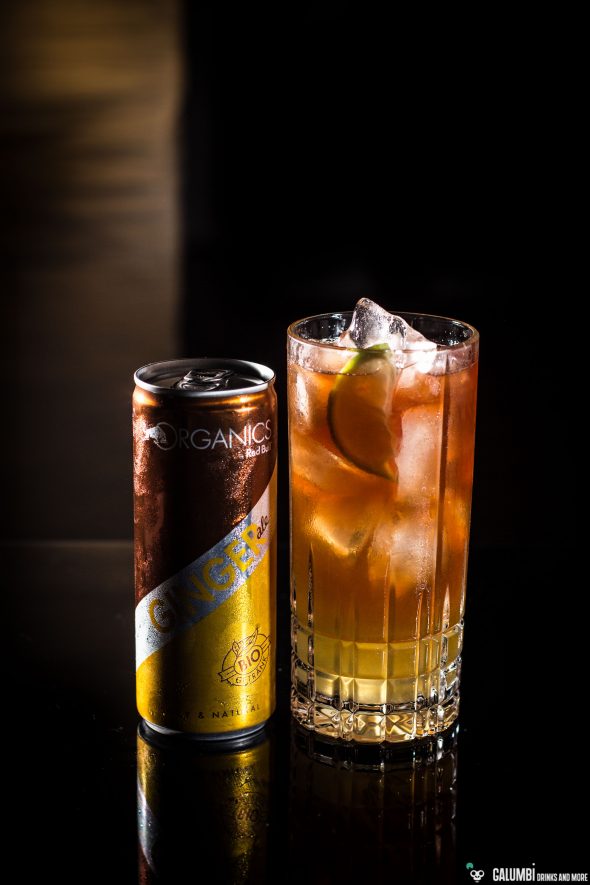 A particularly intense smell cannot be found, but there is the expected ginger, a little sweetness and some lemon. The ginger is however much more pronounced than with most of the ginger ales known to me. The first sip has also confirmed this impression: “Spicy & Natural” is written on the can and that is quite true. The ginger is spicier than commonly found in ginger ales. This ginger ale reminds me more than just a bit of a ginger beer. I would call it a kind of cross-borderer, and probably would not have raised an eyebrow if “Ginger Beer” would have been written on the can instead. I like it very much, it is not too sweet and it offers not only a mono-dimensional ginger but also spicy citrus tones (the bergamot can be subtly noticed). Just because it really reminds of a ginger beer, I’m not quite sure if I can completely recommend it as a ginger ale. I have used it in an Añejo Highball, which usually asks for a ginger beer. Here, the Red Bull Organics Ginger Ale was good but not outstandingly good. I can of course also imagine it in a London Buck or a Horse’s Neck – but you’ll have to deal with a little bit more ginger than you might be accustomed to in these highballs. 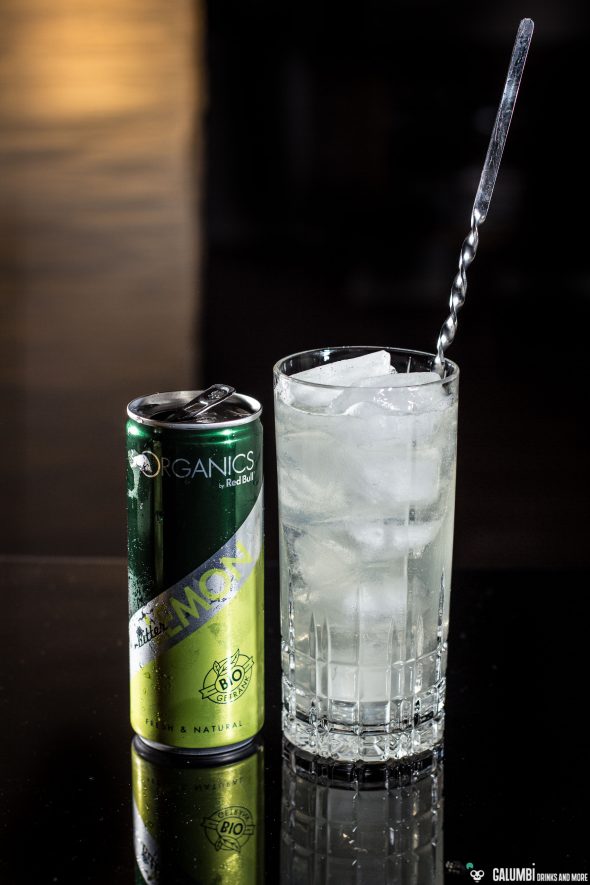 On the nose a spicy lemon with clear lime undertones is not overly present, but it is there. The Red Bull Organics Bitter Lemon immediately reminds me of the tonic water of the series, since there is a similar pronounced bitter note. Therefore it is a very dry bitter lemon, relatively crisp, perhaps a little less refreshing and definitely less sweet than other bitter lemons. Since most bitter lemons are too sweet for me, I really like the Red Bull Bitter Lemon! Here, too, I simply opted for a classic gin (because it makes comparing much easier, I also used the Cotswolds gin) and mixed a gin (bitter) lemon: dry, crisp, lemony and spicy. Experiment succeeded!

As mentioned in the beginning, it is quite obvious that Red Bull probably thought less about selling soft drinks than about selling filler drinks for mixing purposes. In fact, I also like the three neat, but I can imagine that especially the tonic water and the bitter lemon may be a little bit too dry for many people. For the use in mixed drinks, however, in my opinion this is rather a plus and a quite successful expansion of the range of filler drinks for the bar. So we can be curious about how the series will perform on the market in the long term. But if we take the considerable market power of the Red Bull Group into mind, it is hardly imaginable that these products won’t find their place. Especially in times where the company even manages to establish products that have nothing to do with the beverage industry at all.

Buying sources: you can find the Red Bull Organics in many supermarkets or at specialized retailers.