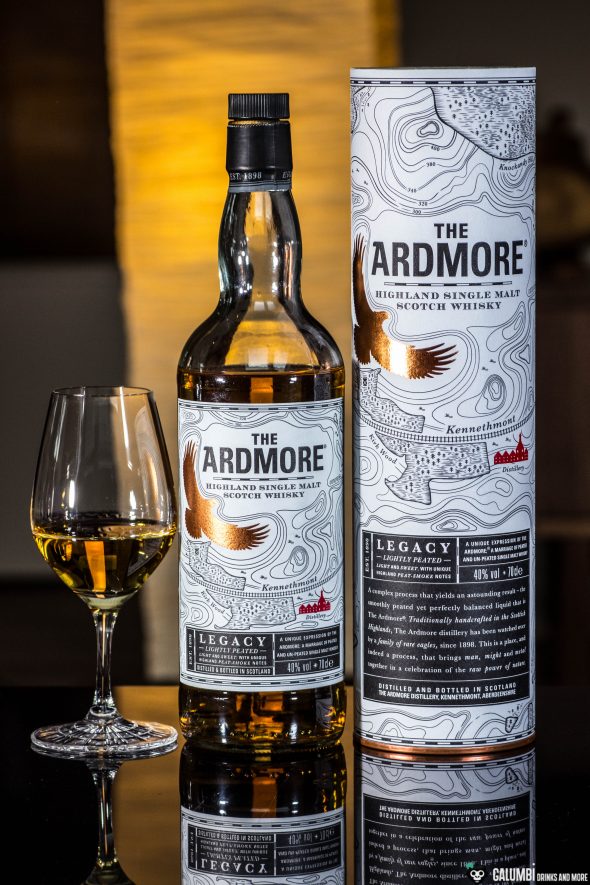 After a few more or less turbulent days of moving my stuff from my old place to the new one it is finally time to continue blogging. The last days have once again shown to me how much I hate to move because of all the things that have to be done. Especially as a lover and collector of spirits this is anything but fun since the transportation of all the bottles is not necessarily free of risk and also you simply have to carry a lot. Of course there’s also the usual stress that comes with furniture, boxes, etc. However, when you’ve finally made it, this is the ideal opportunity to enjoy a moment of peace and to open yourself to the new environment. And what could be better than a glass of Scotch Single Malt Whisky while doing that?

And so I would like to introduce such a spirit today. It is the Legacy whisky from the Ardmore distillery in the Scottish highlands. The Legacy is – as a symptom of our times – an NAS bottling which aims at connoisseurs and beginners alike and offers a nice introduction to the world of Scotch whiskys with its slight smokiness. With a price around 25 €, this single malt is also quite cheap and therefore – purists may forgive me – also very interesting as a cocktail ingredient (of course not all the cocktail ingredients have to be necessarily cheap, but when it comes to Single Malts you definitely think twice before using them with other ingredients). The Ardmore Legacy comes with 40% vol. and is both artificially colored and chill-filtered.

But of course I also want to take a look at the more detailed characteristics of this bottling as well as at the distillery where it comes from. The Ardmore distillery is located in Kennethmont in the Council Area Aberdeenshire in the middle north-east of Scotland, what makes the whiskys from this distillery fall into the Highland category. The distillery was founded in 1898 and is now part of the global spirits giant Beam-Suntory which belongs to the Japanese Suntory Group. Ardmore has for a long time mainly produced their whisky for the blending industry and still manufactures whiskys for this purpose. In addition to the Legacy there are also some other official bottlings of the Distillery. 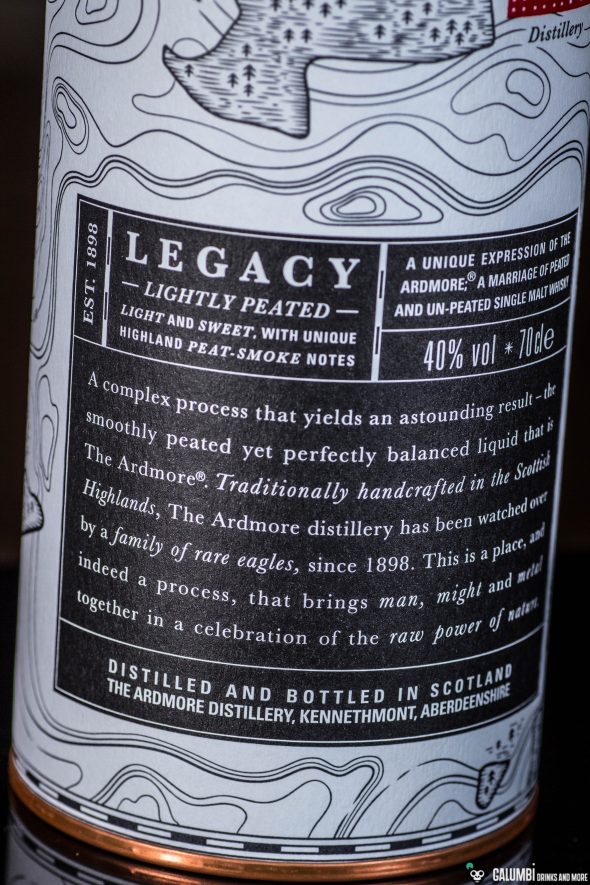 The Ardmore Legacy blends peated and non-peated single malts and after a maturation in former bourbon casks they are also allowed to mature in in so-called quarter casks as a finish. The concept is quite known from the Laphroaig Quarter Cask. But what exactly are quarter casks? The answer is quite simple: Quarter Casks are smaller casks with a capacity of approx. 50 liters that were formerly designed especially for easier transport with pack animals. Today, of course, you do not rely on donkeys and mules any longer but you use them because the whisky has more contact with the outer wall of the cask inside a quarter cask and can thus absorb more flavors from the cask during storage in a shorter period of time. In times of growing NAS bottlings this is a very popular method to bring more flavor to the whisky in less time.

But before I want to present you my tasting notes I would like to say at least something about the design of the bottle and the packaging. The copper-colored eagle looks really nice (it is an allusion to an eagle family, which is supposedly watching over the distillery since its founding in 1898) and in combination with the map of the surrounding area of Kennethmont it gives you the feeling to hold a very valuable product in your hands. Thus, the bottle also cuts a fine figure in every vitrine. 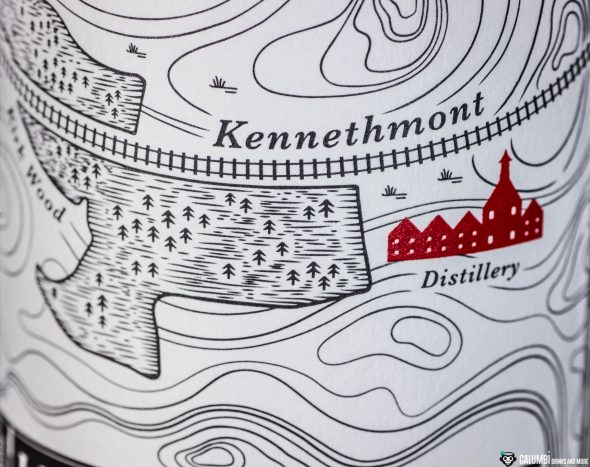 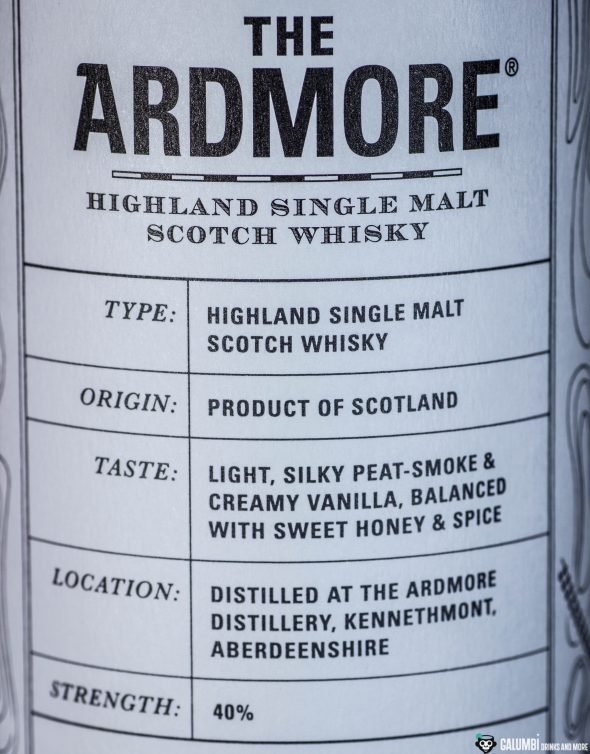 Aroma: Immediately you can scent the smokiness of the whisky, which is however rather discreet compared to strongly peated whiskys. The smoke is very aromatic and rather cold, mixed with a little white pepper and over time there is a growing sweet honey and a subtle, very fine, creamy vanilla pudding. In the background also some light fruits are hidden which trigger associations of lemon or quince.

Flavor: On the palate this whisky is surprisingly gentle with aromatic smoke and again with white pepper which makes place for the sweet side of the Ardmore Legacy after some time, thus featuring and the notes of vanilla and honey which were already familiar from the nose. The fruity tones are not very present on the palate but you can taste a good portion of oak due to the storage in quarter casks. 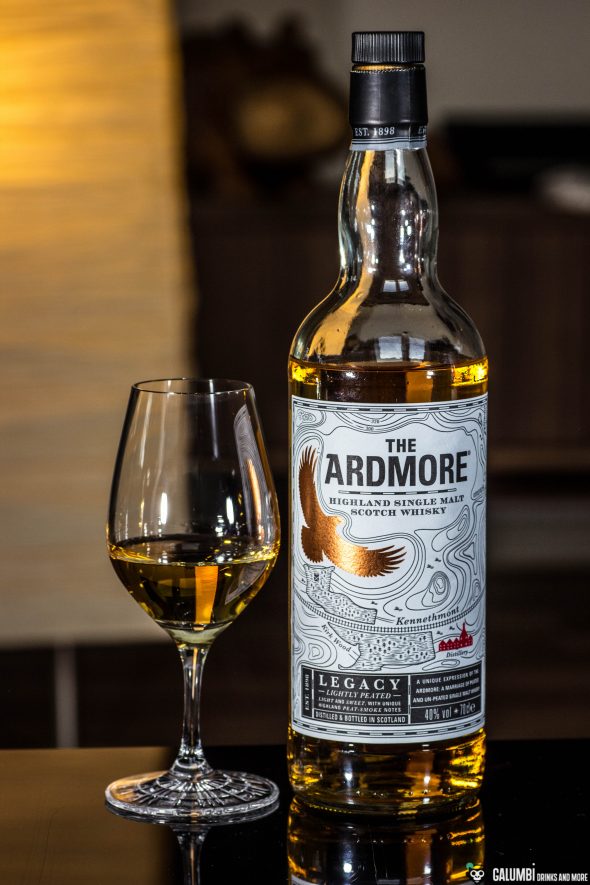