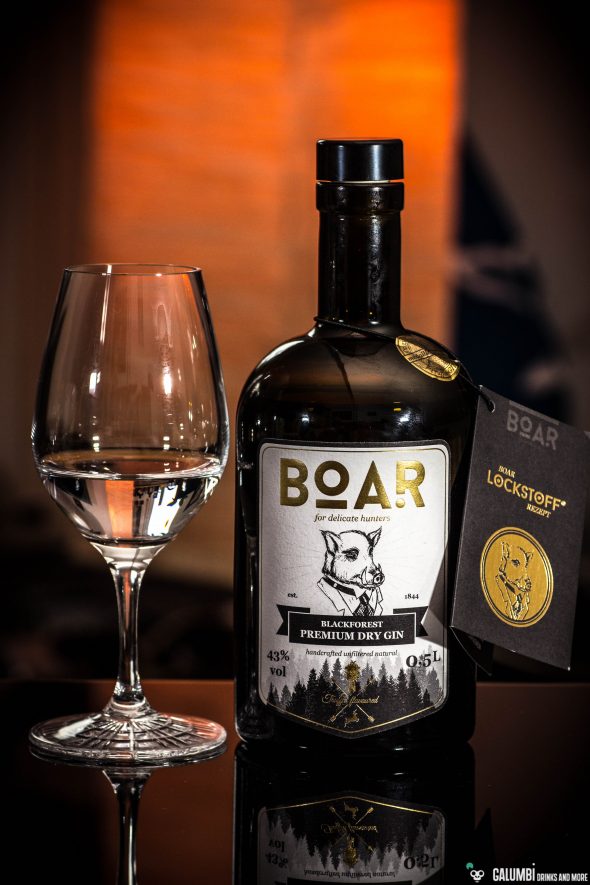 Gin and the Black Forest – to read these two words in one sentence is really nothing special in these days. Rather, a lot of people will immediately think that they already know what such a sentence is about and will most likely have the image of a Monkey 47 bottle in their minds. But that is not necessarily the correct association. The Black Forest region is home to more than 1000 distilleries of which admittedly but a few have a real tradition in the gin segment. Now a new Gin from the Black Forest is arousing some attention and it is not unlikely that we have to rethink our primary association of gin in the future whenever hearing the word “Black Forest”.

I am talking about the BOAR Gin from Bad Peterstal which is distilled in order to become one of the world’s best gins. No doubt this is a very ambitious goal, however, it shows the people behind it mean business and of course it also triggers a certain expectation in terms of quality. The names of the makers of the BOAR Gin are Torsten Boschert, Hannes Schmidt and Markus Kessler. Torsten Boschert and Hannes Schmidt had the original idea for their business because of their own passion for gin. A story that is heard quite frequently in the last years, especially when it comes to gin. Markus Kessler however had already worked as a distiller in his family business, an old Black Forest distillery that goes back to the year of 1844. When he also became enthusiastic about the idea, he decided to join their ranks. In between Kessler’s distillery is now listed as “THE Black Forest BOAR Distillery”.

So much about the story of its emergence. First, of course, you may be wondering what is so special about this gin or the story behind it because in a similar way hundreds of other gins came to life. To answer that we have to take a closer look at the product itself which will attract your attention quite quickly I guess. The BOAR Gin already announces on its label that it is a “Truffle flavored Gin”, that is to say a gin made with the addition of truffles. At least that triggered my curiosity a lot because I simply had not heard of a similar gin before. But on the other hand the guys at the Boar Distillery also rely entirely on solid craftsmanship and local ingredients from the Black Forest. The botanicals are not named entirely, but besides the obligatory juniper it is lavender, lemon peel, thyme, pepper and of course Black Forest Truffles. That there has been an old tradition of truffle cultivation in the Black Forest was completely new to me when I did some research about the product. Apparently, the trade with truffles in earlier days was mainly a business conducted by Jewish people and was banned during the darkest chapter of German history in the Third Reich.

But why do you actually want to use truffles in a gin? The explanation here is quite interesting because Torsten Boschert and Hannes Schmidt both were obviously very unhappy with the phenomenon of a rather sharp and bitter finish that can frequently be encountered when tasting gins. I am also very familiar with this; it has almost become a regular expectation of mine when having a gin. Apparently the makers of the BOAR Gin found out during their experimentation phase that the truffles seem to help with this problem (depending on dose and time of addition) by making the gin very mild while simultaneously removing almost all of its bitterness. The more I read about this, the more curious I became to see whether this difference would really be noticeable in the BOAR Gin.

I also want to utter a special word of praise about the design of the bottle that I really like. The color composition of Golden font, shades of black and the drawing of a Boar wearing a funny suit is really beautiful. The Black Forest silhouettes in the lower area of the label also fit into the flair of this gin. On the backside you’ll find handwritten information about the batch of the bottle and its date of distillation. All in all it is a very high-quality looking bottle that surely makes a good figure in every bar-cupboard. 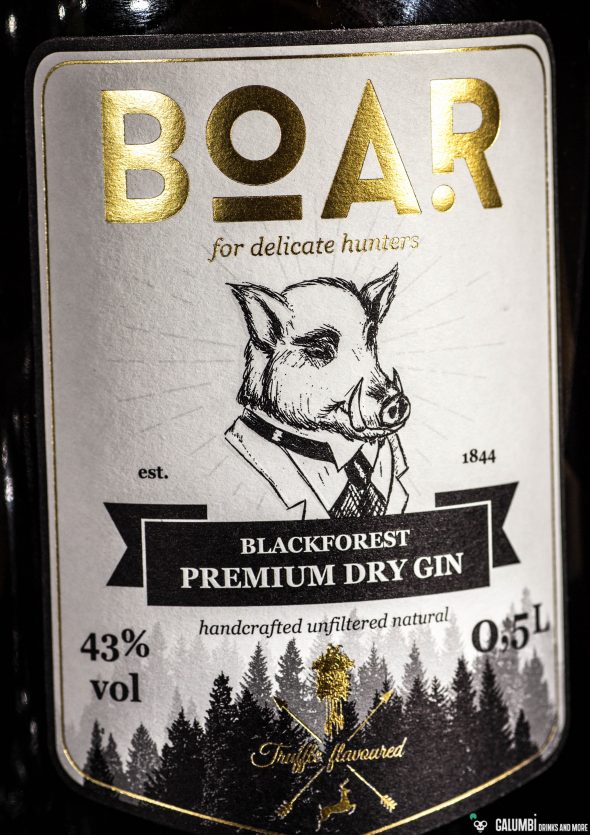 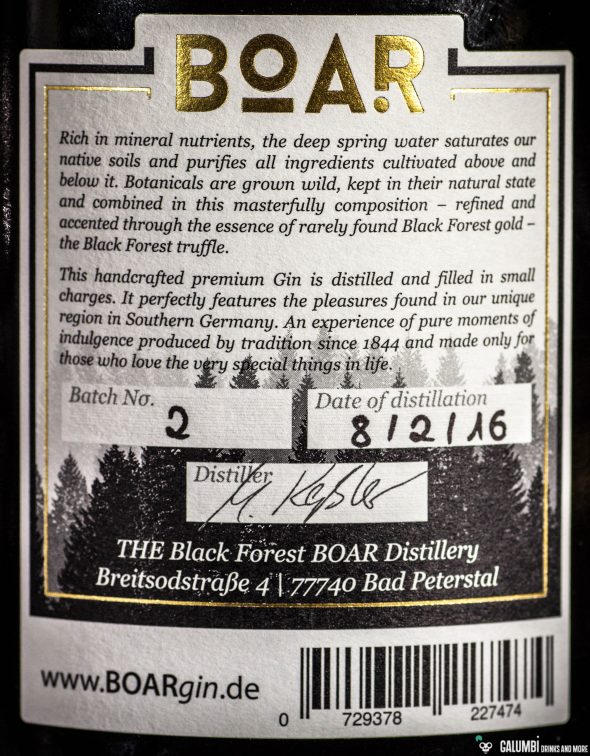 Around the bottle’s neck you’ll find a small card with a recipe for a cocktail made with BOAR Gin called the “BOAR Lockstoff” (German word for attractant) which I might try out here in the coming days.

Aroma: You can instantly scent that you are dealing with a gentle and finely balanced gin. Juniper is there, but does not move too close into the foreground. The BOAR Gin rather is located on the citrus side of gins which is reflected by the fresh and fragrant aroma of lemon peel which is also there from the very beginning. Even some lavender draws attention to itself, but first it greets a little hesitantly behind the overture of juniper and citrus. Fine white pepper, a subtle spruce and fir resin triggers woody associations. Who expects a truffle bomb on the nose such as you would find it in a truffle oil will be disabused.

Taste: On the palate the BOAR Gin starts a little more powerful than I expected. Not necessarily like a rampaging boar but quite thoroughly. After a wild dance of juniper and lemon with the lemon dancing the leading role comes the thyme and the lavender. Then there is again something like a delicate and subtle spruce or pine which contributes to the overall picture that makes me think of forests again.

Finish: The BOAR Gin kept its promise. It is neither bitter nor sharp in the finish but very soft and creamy, perhaps the smoothest Gin I have tasted in this context. There is a little pepper, a touch of juniper, resin and a hint of eucalyptus coating my mouth while very slowly fading away. The truffle can – if at all – only be subtly guessed in the background but does excellently do what it is there for.

The BOAR Gin has completely convinced me of its quality. Of course I have also used it inside of a G&T. I immediately thought about trying it with the Mediterranean Tonic Water from Fever Tree, although this particular tonic relies on a flair far south of the Black Forest region. Nonetheless its thyme and lemon tones absolutely harmonize with the BOAR Gin. 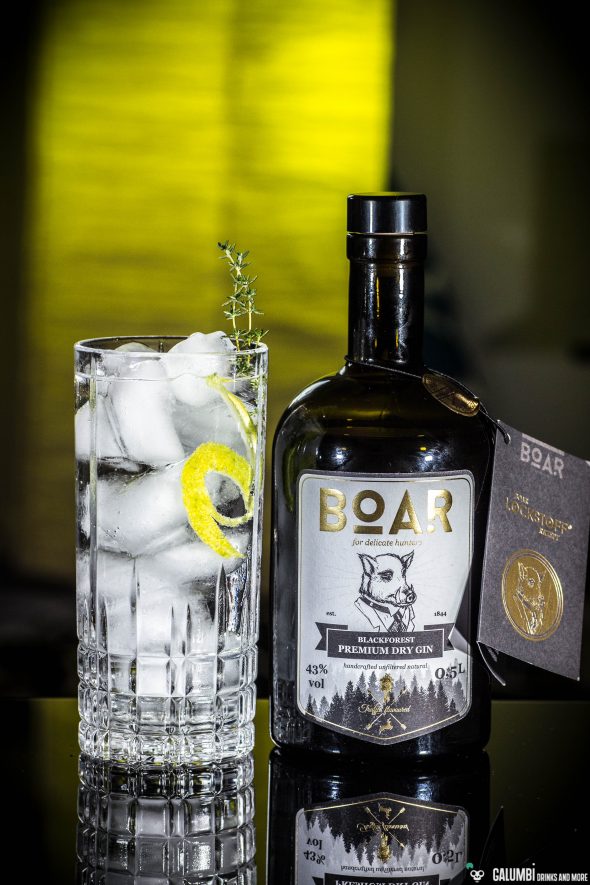 Buying sources: The BOAR Gin is available in stores or online. It comes with 43% vol. and a 0,5l bottle costs about 35 Euros.