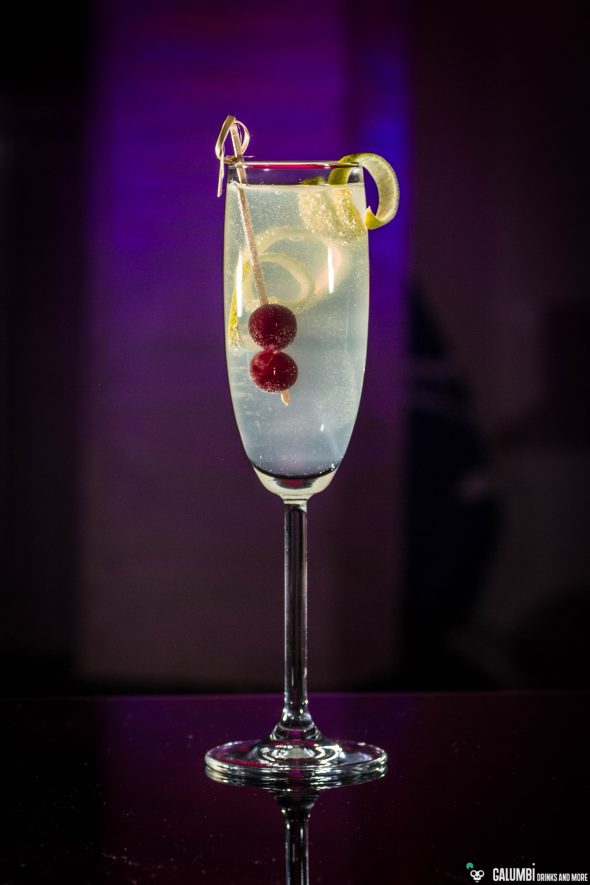 It is not always an easy thing to name a newly created cocktail properly. Most of the drinks in present times own their name to either a certain flair that emphasizes the idea behind the cocktail, or the name is an allusion to people, places or bars that have played an important role in the drink’s genesis. Meanwhile it has become a rather rare habit (one that is also a little frowned upon) to metaphorically name a cocktail after its alcoholic effect. In earlier days, however, that was sometimes the case. One of the most famous examples is for sure the drink I’d like to write about today which owns its name to nothing less than a French field artillery gun.

Yet it is a cocktail on a champagne base, which is definitely not an ingredient that is most likely to make you think of guns or that is somehow associated with a militaristic flair. But the reason behind the famous French 75 cocktail to be called French 75 lies in the context of the time in which it was born: It is a contemporary cocktail of the First World War, in which the Canon de 75 modèle 1897 was used by the French army, but was also fabricated in the United States of America due to a license deal. The French 75 cocktail has its origin in Harry’s New York Bar, where in 1915 a first prototype was served by Harry MacElhone. Nonetheless, however, MacElhones version is far from what is considered to be a French 75 today. MacElhone mixed a drink that consisted among other things (like champagne) of Calvados, grenadine and absinthe. But in the following years, the French 75 more and more turned into an adaptation of the Champagne Cup, a popular cocktail of the 19th century which was made of champagne, lemon juice and sugar (syrup). But already in the 19th century some bartenders added a dash of gin to the drink which ultimately became the standard in the French 75. The drink was described for the first time in today’s widely popular version by Judge Jr. in his book “Here’s How” in the year of 1927. There it is described as a cocktail made from champagne, gin, lemon juice and sugar syrup. But the drink had its ultimate breakthrough in New York’s Stork Club and also became famous to a mass audience by its appearance in the movie Casablanca and some John Wayne movies.

Down to the present day you can still encounter recipe variations with Cognac instead of gin, which is probably due to the more “French” flair. But I am with the majority of opinions and do prefer the gin variation: gin just works much better with the rest of the ingredients, because it emphasizes the fresh and dry character of the French 75. Sometimes you will probably hear people calling the drink a “75 cocktail” or even “Soixante Quinze” which is not very common but nonetheless authentic. (Although sometimes the “75 Cocktail” refers to the MacElhone-Version. So better ask for the ingredients if you’re not sure.)

Personally I do champagne cocktails only rarely at home, usually on special occasions when I have guests. Sometimes I’m putting my head above the parapet by even replacing the champagne by a more favorable Crémant what some hardliners might consider dropping a clanger. But basically an open bottle of champagne is something that calls for a fairly rapid consumption and often I do not drink enough of it on my own while I don’t want to waste a larger amount of that expensive stuff.

The French 75 is a fresh, sparkling and simultaneously quite potent cocktail. Gin and champagne work really wonderfully here, even if you might suspect it. The drink of course also has that special halo of a fancy and noble drink, so you can perfectly use it as a welcome drink. Although the effect of the French 75 can be quite tricky because it happens all too fast that you feel like only having a small glass of champagne in your hands. Personally I still wouldn’t have named it after a gun, but nevertheless you should be aware of its potency and better run for cover early enough before the French 75mm artillery hits you.

Preparation: Mix all ingredients except the champagne in a shaker and vigorously shake on ice. Strain into your pre-chilled glass and finally fill up with champagne.

Buying sources: In supermarkets, at specialized traders or online.