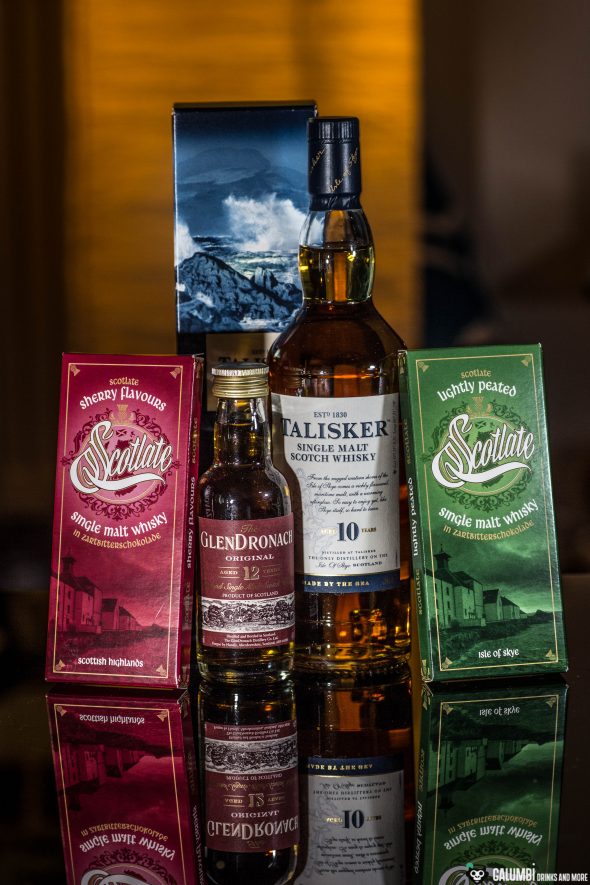 Today is a special day, because this article is kind of a premiere. Never before have I devoted myself to an article about a tasting of chocolate. But second glance this is not as wondrous as it may seem. It is not that I have changed my genre or that I would be up to expand my topics to chocolate, no, today’s chocolate goes hand in hand with two beautiful, classic Scotch Single Malt Whiskys. Not only because the chocolate is a good companion for those whiskys, there is also another reason.

The two chocolates called “Scotlate” are not only a recommended companion to certain Single Malt Whiskys, they are partly even made of Single Malt Whisky with a percentage of 9,5 of the whole chocolate. Sure, I have consumed some chocolates along with Single Malt Whisky in the past. And although I’m not a big chocolate junkie who constantly needs his portion of the “dark gold”, I can’t help but admit that Single Malts and chocolate often are a great couple. Not only because many Single Malts have a chocolate aroma on their own, but because chocolate perfectly harmonizes with many other classic whiskey flavors: light and dark fruit tones, rum fruits, vanilla, salt and also peaty smoke. A similar thought was the reason for creating Scotlate, except that this thought was driven further: Why not add a suitable Single Malt into the chocolate? So now you can have a chocolate-whisky-experience even without a whisky. 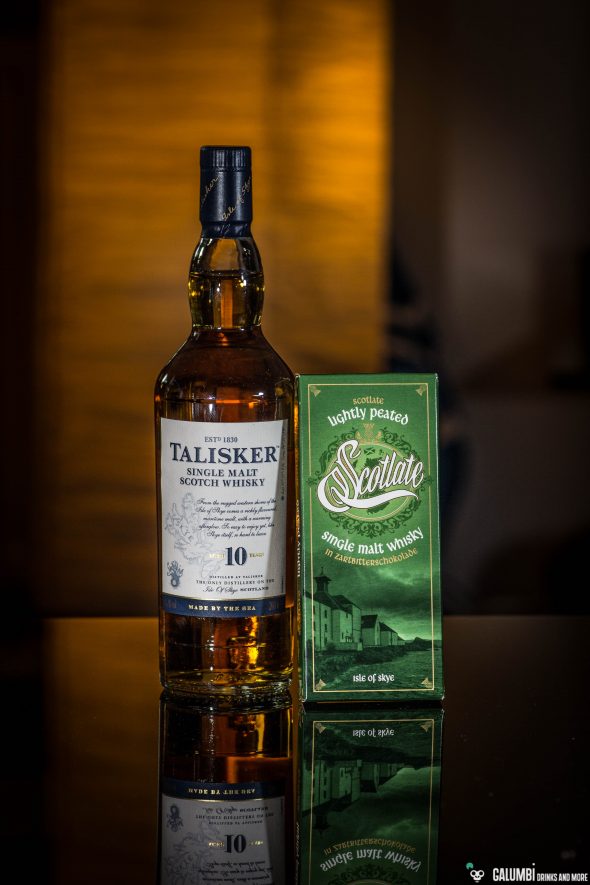 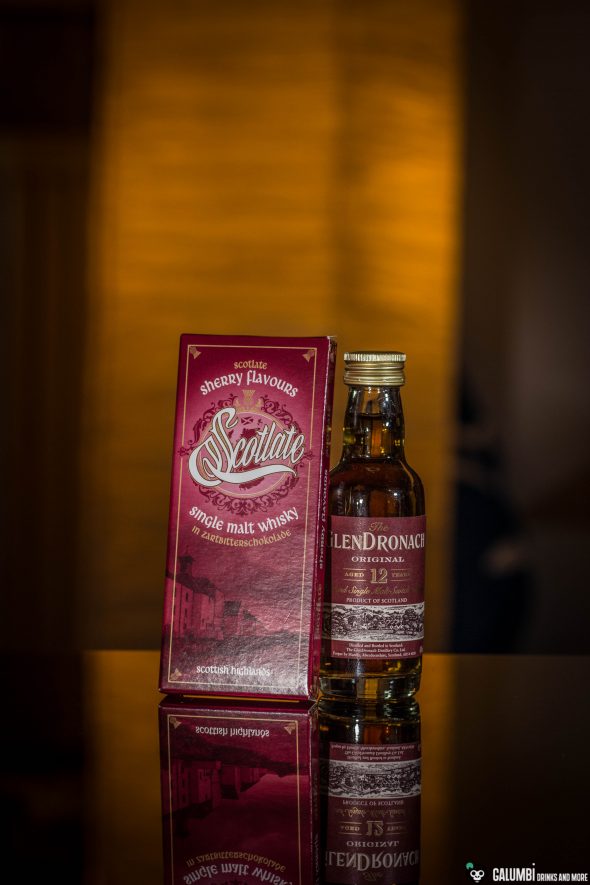 The Scotlate chocolate is produced at the Sächsiche Schokoladenmanufaktur (Saxon chocolate manufactory) in the German town of Heidenau and is currently available in two different flavors which pick up the characteristic profile of very popular Scotch whisky styles by putting emphasis on very different Single Malts. The base is a dark chocolate which is even decorated on its surface with small shapes of pot stills and the typical, pagoda-shaped chimneys of many whisky distilleries. The Scotlate chocolate – like many other chocolates – features an outer chocolate shell with a softer core of cocoa mass (which also carries the aroma the whisky). So you don’t need to worry about something like a liquid filled chocolate bonbon or something like that. Also taste of the chocolate is far from being alcoholic. On the contrary: the Single Malt used is skillfully embedded and appears pleasantly subtle on the palate. It is absolutely suited to have it with an accompanying Single Malt and I have to say that I also like the chocolate significantly better in combination with the corresponding dram. But since I’m not going to become a chocolate blogger, I would also like to write a few lines about the Single Malts used inside of the Scotlate chocolate: Although the manufacturer does not indicate the explicit type of whisky that was used inside of the chocolate on the package, you can find information about that question. The green “Lightly peated” version was made with a ten-year-old Talisker (there is actually subtle smoke, sea salt and coastal flavors on the palate) while the red “Sherry Flavours” chocolate contains a 12-year-old Glendronach (Sherry, dark fruit and a little oak aroma can be found behind a mantle of dark chocolate). 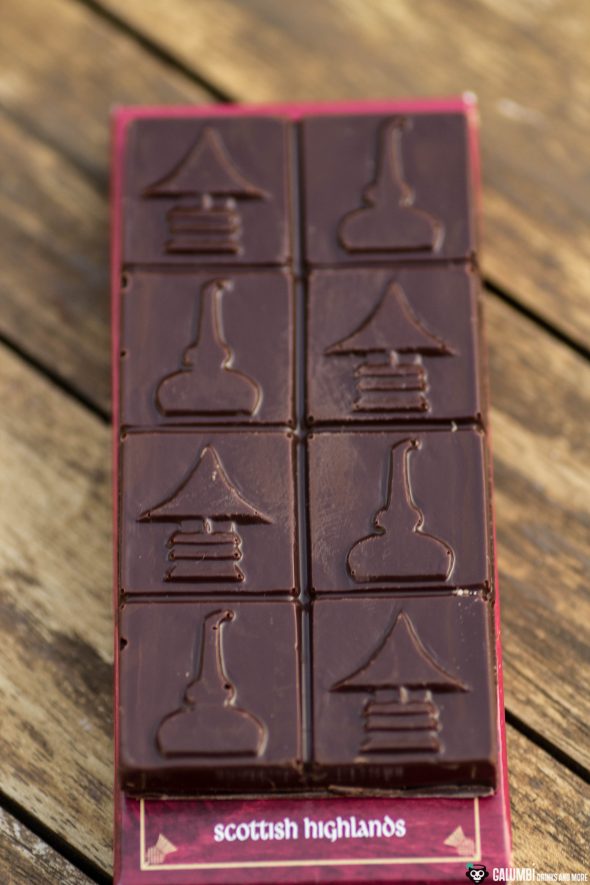 So it’s time to have a quick but closer look on those two whiskys: 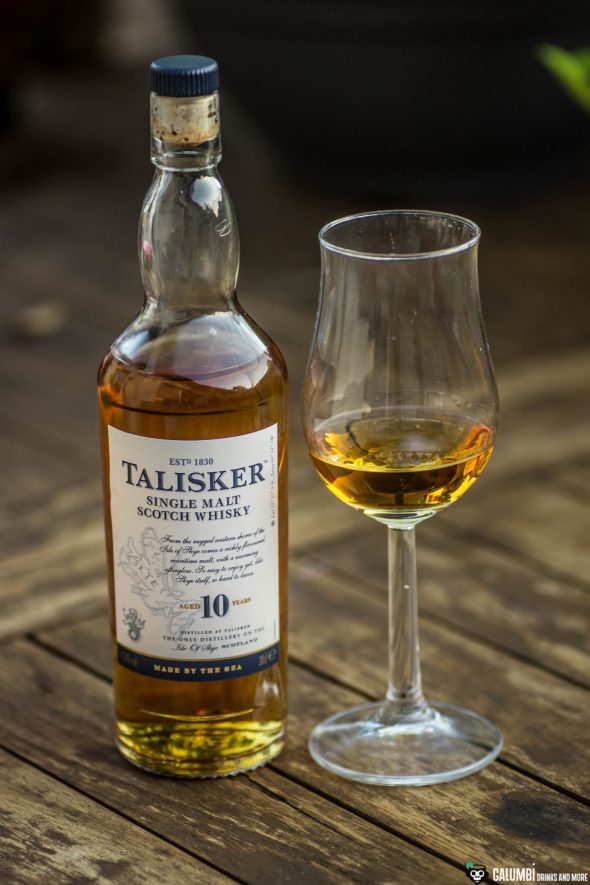 The Ten-year-old Talisker comes from a region that should be familiar to many Scotland tourists, probably because the Isle of Skye is not only famous for its distillery but also for its rugged, picturesque scenery. The Ten-year-old Talisker is something like the flagship of the distillery and the world’s biggest spirits group Diageo included it into its representative series of the “Classic Malts of Scotland”.

The Talisker 10 was allowed to mature in a 100% American first-fill and second-fill hogsheads that used to host American Bourbon whiskey before. The malt for Talisker has been kilned over peat fires, which gives it its typical smoky and marine flavors. With 45.8% vol. the Talisker distillery is bottling their whisky somewhat stronger than many others do and already used to do it before a higher degree of alcohol became modern among many other manufacturers.

Aroma: medium-strong peat smoke in front of some lemon peel and a fine sweetness. Behind that there’s some bright fruit, sea salt and nice maritime associations. A first-class island whisky.

Taste: Smoky with a tingling heat such as that from ginger or cayenne pepper; fresh notes of citrus and oak in the background.

Finish: long, spicy and smoky with a little pepper 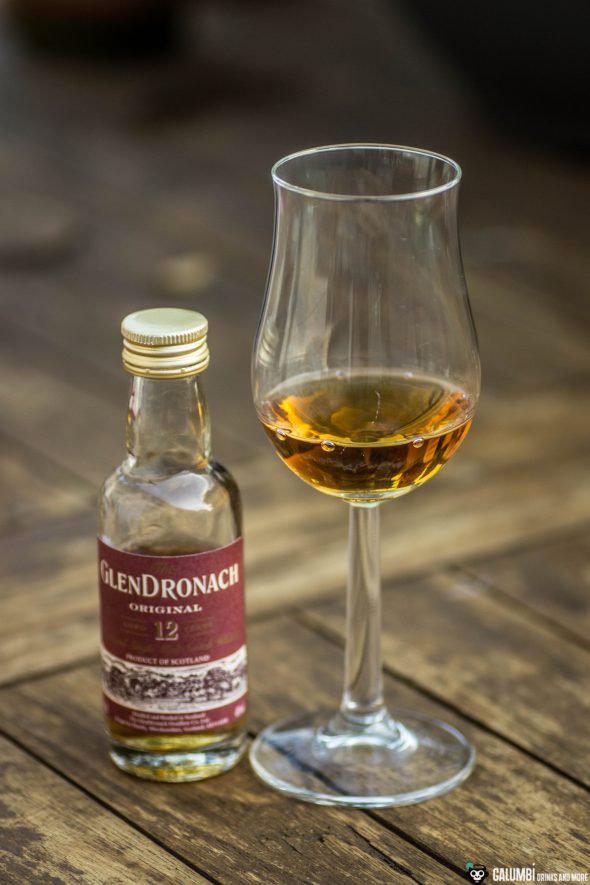 The 12-year-old Glendronach is of entirely different character than the Talikser and is the representative of the large Highland whisky region for the Scotlate series. It comes from the region around Huntly in Aberdeenshire in the Scottish Highlands and is allowed to mature there for 12 years in former Pedro Ximenez and Oloroso casks made from European oak. And there is no doubt about that when you try this Single Malt: the full Sherry cargo with its velvety and fruity notes comes into play, making the Glendronach distinctive of this way of making Scotch.  With 43% vol. it is a little “lighter” than the ten-year-old Talisker but in contrast to the Talisker it is neither colored nor chill-filtered. This whisky is a typical Glendronach, though not all the Single Malts from that distillery are that much on the sherry side. Nonetheless, Glendronach is famous for those malts. 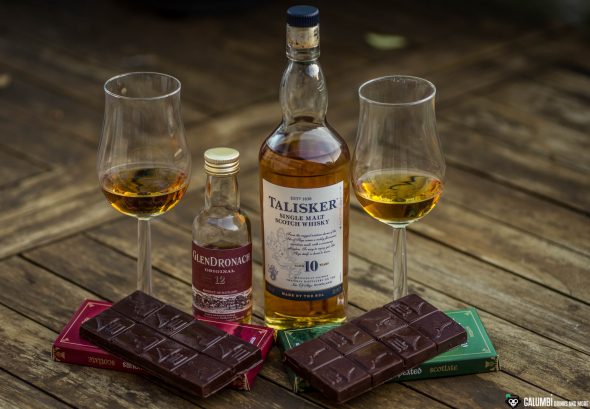 Buying sources: The Scotlate chocolate and the whisky can be found here (only German language). With round about 4.50 € for a small 50g-bar this is not really cheap, but if you understand it as a quality companion to your whisky with quality ingredients, the price maybe a little more reasonable.