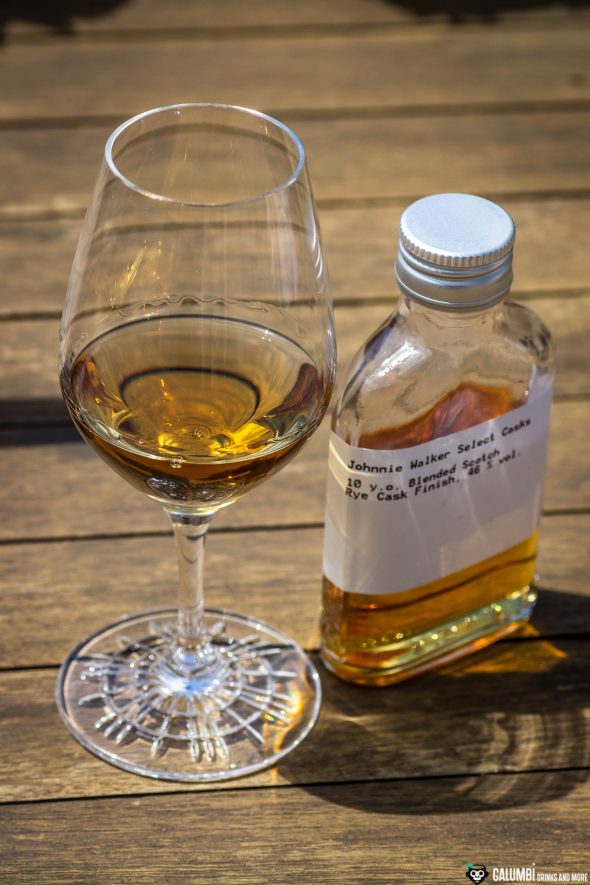 The Johnnie Walker brand is certainly one of the most famous spirits brands around the world and I guess millions of people will very likely have had their first whisky contact with a Johnnie Walker. Now I don’t want to write much about the brand itself since it’s already famous and the most sold Scotch in the world, yet I would like to introduce a rather unusual whiskey that was much anticipated before its launch in October 2015.

Thinking about Johnnie Walker as a regional brand of course is a very romanticized notion. Johnnie Walker belongs to the world’s biggest spirits group Diageo and so today’s bottle is part of a worldwide marketing strategy and has not much to do with the Johnnie Walker brand of the early 19th century. Nonetheless it is a very interesting one: Johnnie Walker has recently launched a lot of NAS (No Age Statement) bottlings so it is even more astonishing to see a new blend with age indication. Especially one from a rather affordable segment (usually under 40 €). But the real peculiarity is that this blend has been finished in former Rye whiskey casks. This is really unusual because normally the Scotch whiskey industry relies on ex-bourbon casks to mature its whisky in. Now it may be a question of definition and denomination since there may be also a lot of former rye casks among the “ex-bourbon-casks” that are usually declared on the labels. But it can rarely be found that a whisky explicitly relies on ex-rye-casks.

The Johnnie Walker Select Casks Rye Cask Finish 10 Years is a Blended Scotch – it is a generic Johnnie Walker. In order to speak about Blended Scotch different whiskeys from different distilleries were married to achieve a new taste. Every whisky that was used inside of today’s blend is at least 10 years old and was allowed to finish in former Rye whiskey casks after the blending process by Johnnie Walker Master Blender Jim Beveridge. Johnnie Walker even reveals that a Cardhu forms the heart of the blend. Cardhu is a floral and fruity, slightly spicy, sometimes even slightly chocolaty single malt from the Speyside region in the northeast of Scotland. A decision that was certainly made not entirely by chance as it is reflected also in the flavor profile.

Aroma: You can instantly scent typical “American” characteristics on the nose: vanilla, American white oak, a sweet note that reminds me a little of glue and also some bright fruit in the background. Here the Cardhu (and perhaps other Speyside whiskys) become clearly noticeable.

Taste: A really sweet and aromatic blend which coats your taste buds very pleasantly. As a friend both of Speyside whiskys (especially of the 12- and 15-year old Cardhu) as well as of good Ryes, I really liked the Johnnie Walker Select Casks Rye Cask Finish 10 Years. Although I am usually not the biggest fan of Johnnie Walker.

Finish: medium to long with spices and a little honey.

Buying sources: In specialized stores or online. If you are a spirits dealer yourself, I can recommend you to look for the Johnnie Walker Select Casks Rye Cask Finish 10 Years here (only in German language).