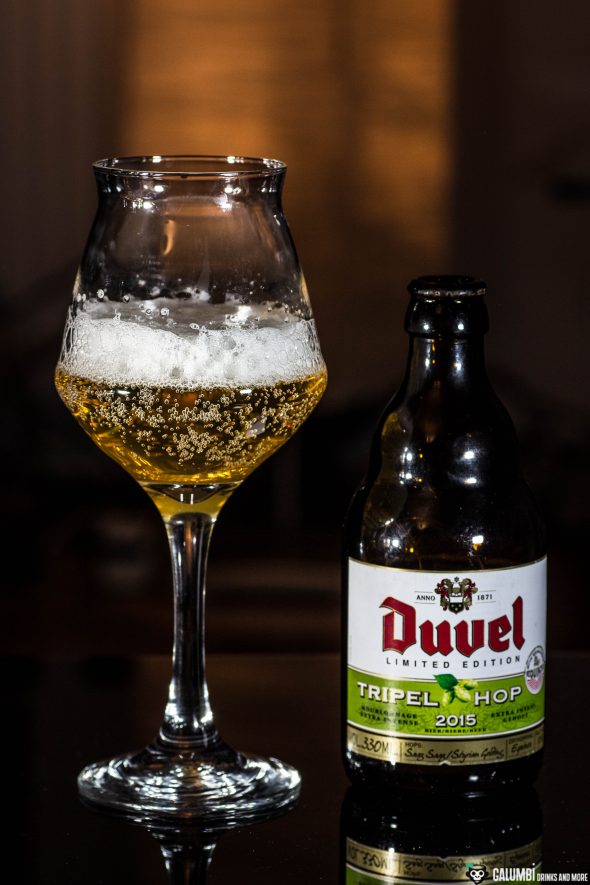 The Belgian beer brand of Duvel from the Duvel Moortgat Brewery in Puurs, Antwerp will certainly be known to a lot of beer lovers. Whether from trips to Belgium or as a deliberate purchase in a beer store. And with the Duvel Tripel Hop we’re dealing with a very contemporary beer today.

Because the Triple Hop relies – as the name already suggests – fully on the current trend towards stronger hopped beers. Duvel usually uses two kinds of hops during the brewing process, but the Duvel Tripel features also a third hop variety in order to intensify the hoppy flavor even more. This is reached by the technique of dry hopping, which I have already briefly described in the context of the Hopfensünde beer from the Bergmann brewery in Dortmund. Duvel Tripel Hop opts for a different hop each year to complement the classic base hops Saaz Saaz and Styrian Golding. In 2015 the brewery chose the Equinox hop, which was then replaced by the American aroma hop HBC-291 in the year of 2016. If you are wondering about the name HBC-291, you must know that this particular hop is a very new variety, so apparently a more euphonious name must still be sought.

Ultimately, this with its 9.5% vol. is not a light one at all, but it gives you the full cargo of flavors you’d expect from a hop intense beer that’s not tasting like a common IPA. My tasting notes refer to the 2015 Equinox variant.

On the nose the Duvel Tripel Hop is already very hoppy with rich citrus notes (grapefruit), yeast and fragrant honey. On the palate the full hop character is confirmed alongside with malt, honey, pepper and a green, slightly grassy note. A beautiful beer that will convince every friend of hop intense beers.