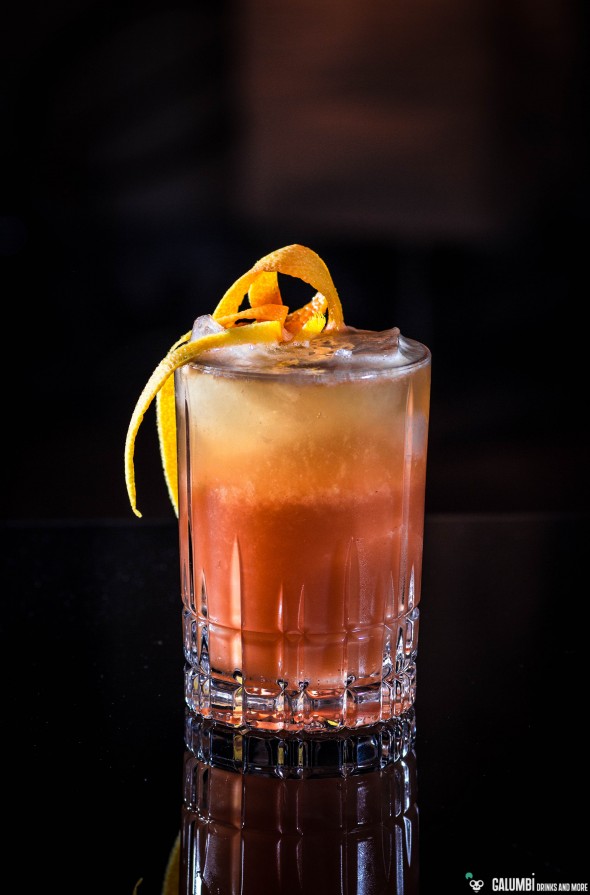 Cocktail Bitters are of course a not to miss-ingredient behind every bar (also behind every home bar with a certain aspiration). They are virtually the icing on the cake. All the more interesting it is to experiment a little with them. Beer, however, will be certainly less associated with the cocktail craft. At least outside of the major metropolises, where some might already think of using beer in drinks as a trend of the past. However, the present cocktail extremely skillfully combines both components.

The Hoops and Garters cocktail was invented by American Bartender Benjamin “Banjo” Amberg from the Clyde Common bar in Portland, Oregon. Benjamin Amberg has developed the recipe out of necessity, as he was about to fix an awful beer cocktail he was trying for the first time. And what can you say? Sometimes from such situations really good stuff is arising.

The Hoops and Garters convinces with a very fine and fruity freshness of the used citrus juices, thus building the excellent fundament for the complex bitter tones of cinnamonic Angostura and the hops from the beer. A flavorful experience that also fits perfectly into the time before Christmas.

Cinnamon infused Angostura Bitters: Pour the content of a 120ml bottle of Angostura in a screw top jar along with 2 cinnamon sticks (about 5 cm long) and let it rest for about 10 days. Then remove the cinnamon sticks and fill the bitters back into the original bottle.

Preparation: Shake all ingredients except for the beer on ice and strain into your pre-chilled glass filled with ice cubes. Finish by topping with the beer (the original recipe calls for about 9 cl to 12 cl of Pilsener beer. Personally I like to use a little less beer, since this brings out a little bit more of the citrus character, which I really like.

Glass: Collins / Long drink glass (For my version with a little less beer I have chosen the Perfect Small Longdrink Glass from the Spiegelau Perfect Serve Collection by Stephan Hinz)

Buying sources: All ingredients can be found in well-stocked supermarkets. Of course you can also try to order them online.