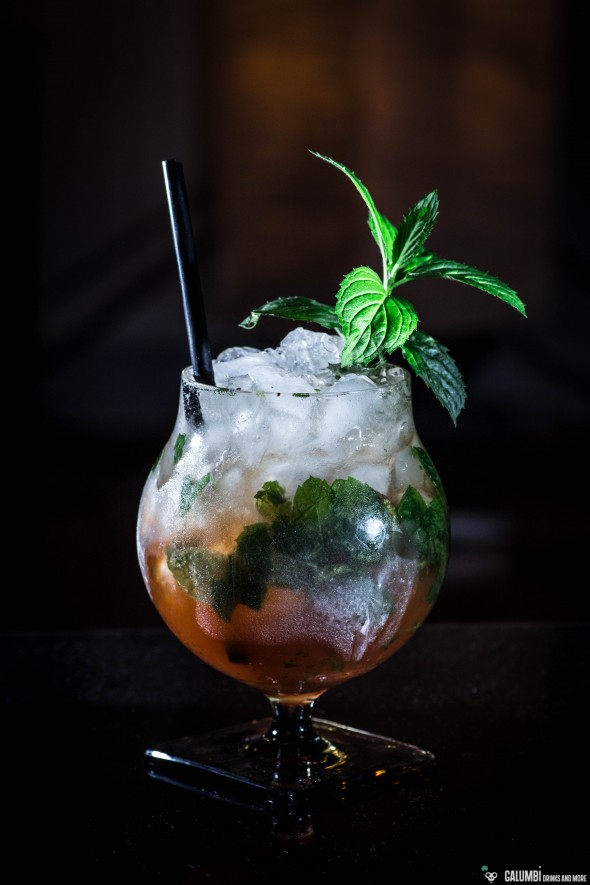 What could be better than a refreshing cocktail that not only quenches your thirst but also carries you off to another world? A well-made Swizzle can definitely be such a cocktail. Too bad they are a little bite out of fashion.

(Since I wrote a few words on Swizzles in general in connection with the Golden Gate Swizzle, today’s article will concentrate more on the drink itself than on the peculiarity of Swizzles.)

The Queen’s Park Swizzle is certainly one of the most famous Swizzles next to the Rum Swizzle. Ultimately, it is indeed a kind of modification of the Rum Swizzle that comes up with an enhanced flavor profile. Trinidad rum or Demerara rum is joined by the fruity-fresh notes of lime, fresh and spicy mint and Angostura bitters. For a little balance also some sugar syrup is added. Finally, the swizzled drink will be floated with soda water.

Of course, as you might see when browsing through this list of ingredients, there is a certain proximity to the Mojito, but the latter is however significantly different with the usage of white rum and differing proportions. Thanks to the dark, pungent notes and a higher level of complexity I would always prefer a Queen’s Park Swizzle over a Mojito at anytime.

The drink did not originate in London as one might think when reading the name. Rather it goes back to the Queens Park Hotel in the capital of Trinidad and Tobago, Port of Spain (the hotel was obviously named after the area in the British capital, though). There, this drink was first served in the 1920s. It is interesting that the original recipe does not rely on a domestic Trinidad Rum, but calls for Demerara rum. The reason for this is the state of the rum industry in Trinidad in the 1920s, which was still in its infancy and therefore drinks where mainly served with any rum available in bars of that time.

Recipe (based on the book “Cocktailian – Das Handbuch der Bar”):

Preparation: Simply build up all the ingredients exc ept soda in a glass filled with crushed ice. Then “swizzle” the drink vigorously with your bar spoon or Swizzlestick between your palms (that means the friction of your palms will let the spoon or swizzlestick rotate quickly) until the outside of the glass turns foggy. Eventually top with soda water.

Buying sources: Trinidad Rum or demerara rum can presumably be obtained only in specialized stores or online. The remaining ingredients can be found in supermarkets. I like to buy my fresh mint in Turkish grocery stores.