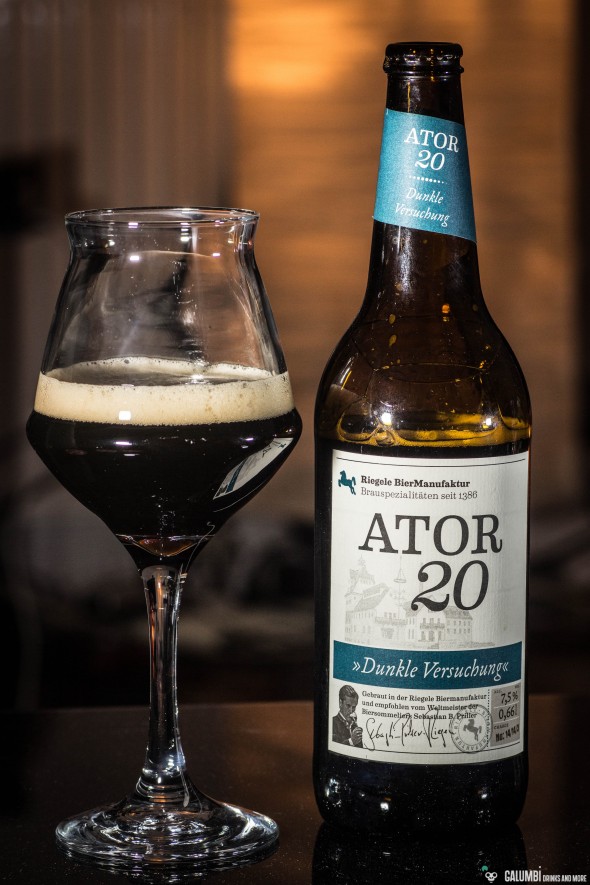 The “Riegele Biermanufaktur” is a German brand for craft beer products founded by beer-sommelier Sebastian Priller-Riegele, who pays tribute to the many different varieties of brewing styles by offering some interesting specialties within the Riegele range. Today’s Ator 20 is kind of a dark bock beer (a double bock, to be exact) which is named after its original wort content in the brewing process of 20 percent.

A particularity of this bottom-fermenting beer is the long, cold maturation at the brewery. Bottom-fermented beers are brewed in very cold environments generally due to the specific characteristics of the yeast used. This can usually be very easily derived from the fact whether you have to wear a jacket in the brewery during a visit or not. The taste convinced me entirely of the Ator 20 because it brings a lot of flavors that I really love within beers.

On the nose you can immediately scent the complex aromas of roasted malt (which I absolutely like!) alongside dark cereal tones and some toffee. On the palate the beer also turns out to be very malty and sometimes reminds a little bit of the sweet non-alcoholic malt beverages that are quite famous among younger persons in Germany; if there was’nt a clearly noticeable hop bitterness that skillfully accompanies the sweetness of roasted malt. Maybe this beer would fit better into the season of fall than into summer but as I love to drink dark and stronger beers throughout the whole year that does not really matter to me.

Buying sources: Outside of Germany you will most likely find this beer only at specialized retailers or online.