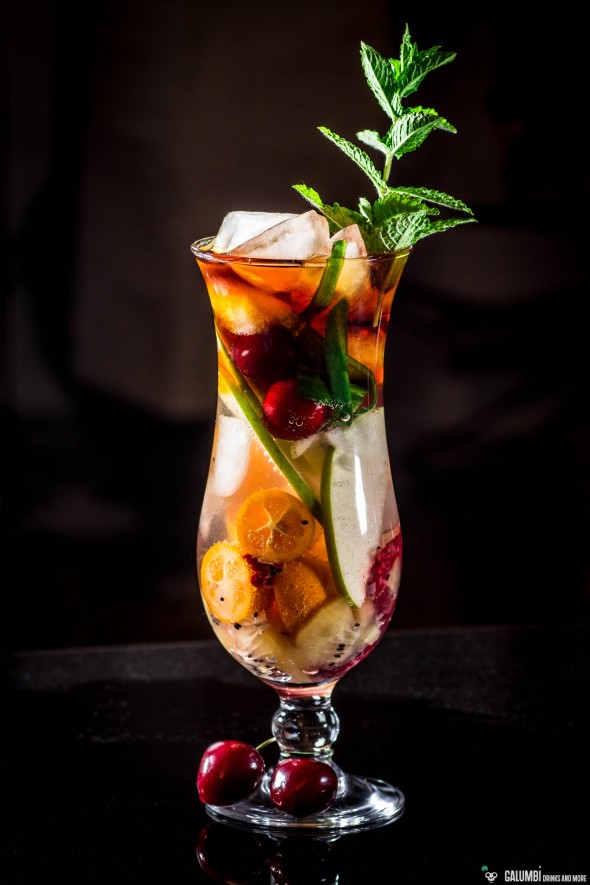 For residents of the Anglo-Saxon language area, in particular the United Kingdom, the present article may seem a bit strange, because the Pimm’s Cup is almost a part of everyday culture over there. It might be similar to Berliner Weisse mit Schuss or Radler in Germany: Everyone knows it and, especially in summer, it has probably been tried by everyone at least once in a lifetime. In Germany and many other European countries the situation is slightly different. Too bad, since the Pimm’s Cup is one thing above all: Summertime in a glass!

Reason enough to introduce it here a bit more in detail. The Pimm’s Cup got its name from the British liqueur Pimm’s No. 1, which is used as the base spirit for this cocktail. There are even more numbers in the range of Pimm’s liqueurs by now, but the No.1 is truly still by far the number 1 when it comes to sales and popularity. It was invented by James Pimm, who build up an oyster business and later an oyster restaurant in the first half of the 19th century in London. There he developed a liqueur as an accompanying drink on a gin base, which offers additional herbal extracts and a delicate bitterness. Meanwhile, the brand “Pimm’s “ is part of  the world’s biggest spirits group Diageo.

The Pimm’s Cup, however, is a highball cocktail in which Pimm’s No. 1 forms the basic ingredient and  fulfills the function of enriching a sparkling lemonade or a ginger ale with additional complexity and its dry bitterness helps to create a truly refreshing experience of a complex cocktail. Another distinctive feature is the use of fresh fruits and herbs, which follow no real prescribed ingredient list. Suitable are, for example, Citrus fruits, berries, or just apples and pears, as well as cucumbers, mint or even borage.

The preparation with lemonade is the classic, English variant. Ginger Ale is more in use outside of the UK, but, however, does work really excellently. If you prefer a classy variant, you ​​can use champagne as Filler. That would be called a Pimm’s Royal Cup. The recipe is really simple:

5 cl Pimm’s No. 1
Lemonade or ginger ale as Filler
Fruits and herbs of the season

Preparation: Give fruits and some herbs inside your glass together with ice cubes and top up with lemonade (for about three quarters). Then float with Pimm’s and garnish with additional herbs.

Buying Sources: Pimm’s can be found at spirits retailers, in well-stocked supermarkets or online.