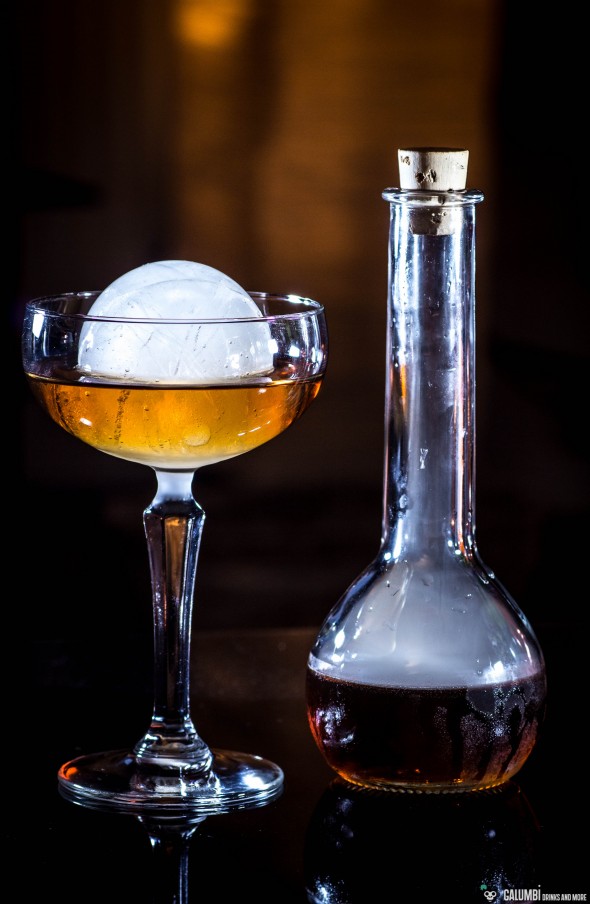 To present and garnish a cocktail adequately is not only an art in itself, it is also essential for many bars’ daily business to acquire renown, to retain customers and to show their class. Therefor some truly impressive creations have emerged in recent times, generating a dense atmosphere in the ever growing progressive approach of cocktail scene and haute cuisine. Of course, pomp and lavish decoration has no end in itself and is no guarantee for good cocktails, but it can add the final touch to a drink. It can! There are also a lot of bars out there, which stake everything on the card of simplicity while definitely playing in the top league of quality.

Today’s cocktail is called Mr. Hyde Fixer Upper and was created in the Purl Bar in London. Mr. Hyde is certainly a household name most people know from Robert Louis Stevenson’s novella, while a Fixer Upper perhaps does not say anything to non-native speakers. So I had to do some research first and have thus learned that “Fixer Upper” is a term used to describe kind of a rundown building. The Mr. Hyde’s Fixer Upper could therefore be a concoction from an occult-looking laboratory kitchen in the cellar of an old house. And exactly that’s the way it appears: Basically it’s a kind of Rum Old Fashioned and consists only of three ingredients: matured rum, cola syrup and chocolate bitters. But in addition, it is flavored in a small, bulbous bottle with the smoke of apple wood that has macerated in Pedrox Ximenez sherry. An absolute sensation of taste! Spicy-sweet smoke combines with aromatic spices and sweetness of the chocolate-complexity of 23-year old Ron Zacapa – a real  explosion of flavors.

At the Purl Bar it is served on dry ice that was doused with smoked tea, which is certainly a style of presenting the drink that’s not that suitable for home use, but of course it is massively impressing. To show this effect I’ve appended a video of the preparation of the Mr. Hyde Fixer Upper below.

Smoke from apple wood which macerated in Pedro Ximenez sherry

Cola Syrup: The exact recipe of Purl’s Cola Syrup is unknown to me, but there are different recipes for homemade Cola syrup out there. You can find a pretty good one over here: http://www.instructables.com/id/How-To-Make-Cola-Syrup/ I recommend to omit the coloring agents.

Preparation: Stir all the liquid ingredients thoroughly over ice and then fill in a small, bulbous bottle. Now blow some smoke into the bottle (it’s done easiest with a tool like the Polyscience Smoking Gun) and close the bottle with a cork (in the Purl Bar the bottle is additionally sealed with wax). Serve with a massive ice ball inside your glass.

Buying Sources: Zacapa 23 and Chocolate Bitters can be found in specialized stores or online. Cola syrup can also be bought in special stores or you can just make it on your own (see above).