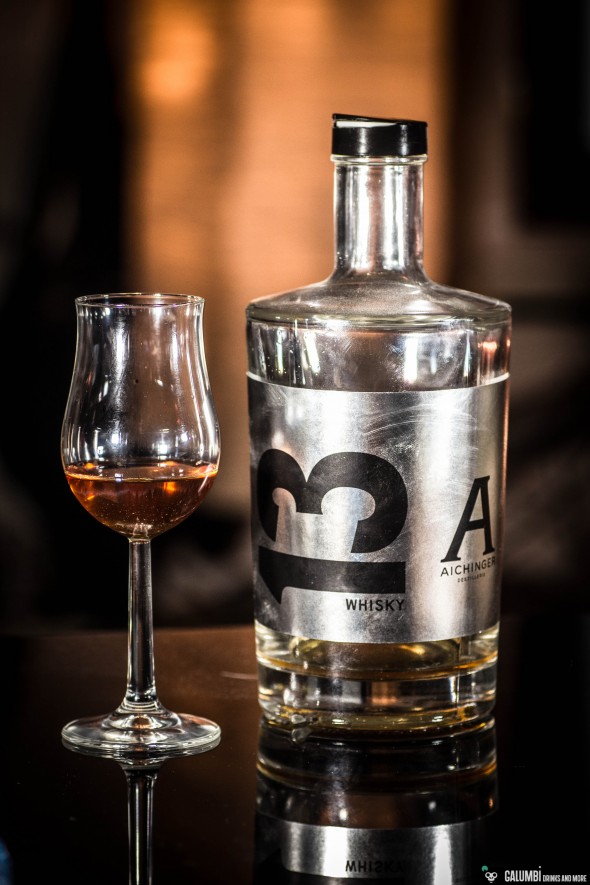 Today’s topic will once more be a spirit. A whisky. However, a very unusual one. Today I’d like to introduce the 13 year old Aichinger whisky from Hartkirchen in Austria. What makes it unusual is it’s specific character as a Wheat Single Malt Whisky. While the classical single malt whiskies, as they are known from Scotland and Ireland, have been distilled from malted barley, the Aichinger 13 relies only on malted wheat. It is not so unusual to use wheat in the whisky production, but normally it is used in the making of so-called Grain Whiskeys, which by no means are made from 100% malted wheat and are thus ranked in a lower quality league. Compared to malted barley, wheat turns out to be considerably milder and softer, so that the cask character in this spirit is even more noticeable.

Also the maturation process of this whisky is interesting, since it was maturing in formerly wine-bearing barrique casks. The manufacturer Aichinger normally produces wine and is now keeping up with the times by producing whisky. However, the number of available bottles is still relatively low (13 years ago, today’s whisky demand was certainly not anticipatable in the current magnitude) so that the Aichinger is no longer available anywhere. So you have to be a little bit lucky in order to get your hands on one of those bottles. As you can see, mine is already almost empty. There is also a “younger brother”, the eight years-old Aichinger Wheat Single Malt – but this one has also become quite rare.
The whisky comes at 41% alcohol and it is not artificially colored. However, it is chill-filtered, which apparently is intended to emphasize the soft notes of wheat. (This is also unusual, especially since there is an extra reference on the bottle’s label – Many Scots try to hide the information of a chill filtration process and you won’t find many confessions of this sort on Scotch Single Malt bottles)

Aroma: strong and fruity notes from the wine casks but not in the style of a fruit brandy (or “Obstler”, a German schnaps) like you can scent it in many continental whiskiess, which are mostly made by distilleries that usually produce such fruit brandies. Vanilla and fine spices in the background. Relatively mild and soft, but with a full cargo of dark, fruity tones.

Buying Sources: see above (currently not easily obtainable. If you’re lucky you’ll find the Aichinger 13 at special retailers or online.)