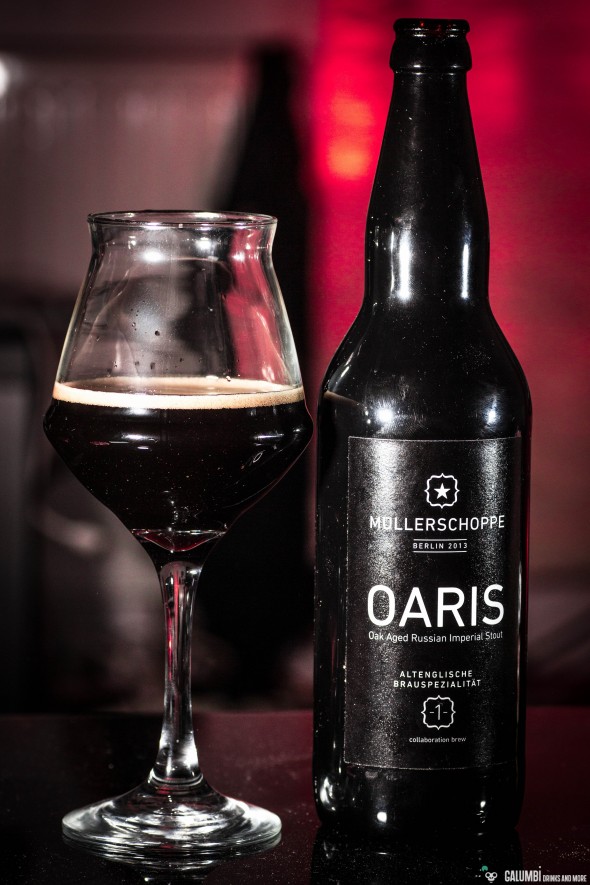 Once again a Stout! In fact today’s beer is the Müllerschoppe Oaris Oak Aged Russian Imperial Stout brewed the English way… are you with me? Russian beer? Or maybe English? Such a name longs for some answers. So let me bring some light into the darkness, even if that means we have to take Scotland and Germany on board.

This putative quadrangle of countries is explained as follows: The beer has been brewed in Germany. by the sommelier Christian Hans Müller (Hans Müller Sommelierbier GmbH) and Thorsten Schoppe, the head behind Berlins Schoppe Bräu company (hence the name Müllerschoppe – the name Oaris is simply the acronym of “Oak Aged Russian Imperial Stout”). The Oaris is “Russian” because the brewing style of Imperial Stout was originally created as kind of a particularly powerful variant of the classic stout on occasion of presenting a culinary gift to the Russian Tsar Catherine the Great. And that was done by the English (in England of course). Now what about Scotland? Although also located on the island of Great Britain, Scotland is not genuinely connected to the brewing style of Imperial Stout. In fact Scotland has to do with a special feature of the Oaris. The Müllerschoppe Oaris matured in two different kind of casks to add some additional flavor to the final brew. Firstly in oak casks in which the Müller Dreistern Sommelierbierbrand has been created, on the other hand in former Scotch Whisky casks of the Highland distillery Glenmorangie.

The Oaris Oak Aged Russian Imperial Stout is indeed something special. With its 9.5% alcohol, the Perle- and Saphir-hops and the strong emphasis of roasted malts (typical for an Imperial Stout – the label tells that barley malt, wheat malt and caramel malt has been used) it promises to be an extremely aromatic product.

On the nose you’ll initially find black coffee or maybe espresso. In addition to that there is an interesting sweetness that’s somehow reminiscent of whisky. In addition, oak tones are noticeable. Behind that I can sense pumpernickel (special bread made of rye flour and whole rye berries from the German Region of Westfalen)

On the palate the pumpernickel is dominant. Namely Pumpernickel with fresh butter. Then again a strong and rich sweetness with hints of oak. Chocolate and coffee as the flavors tend towards the finish. Very impressive and complex. As a friend of this brewing style I really like the Oaris Oak Aged Russian Imperial Stout very much!

Buying sources: The Müllerschoppe Oaris Oak Aged Russian Imperial Stout is available from specialist retailers or online. It’s about 12 to 14 euros per bottle (so actually not really cheap) but since this beer is definitely nothing to drink in a row it’s worth it.