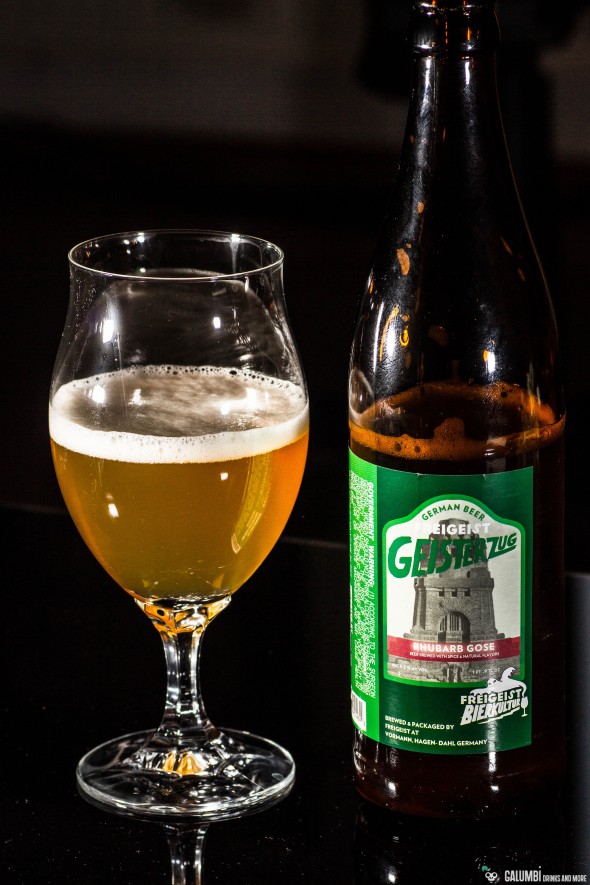 So what is a Gose? Gose is a quite unknown and long forgotten beer-speciality that originally came from the german city of Goslar. It is said that already Otto III. has been a lover of this type of beer. Gose-beers are top-fermented beers and undergo bacterial lactic acid fermentation during the brewing process, which leads to a very sour taste. In addition, salt and – similar to the Belgian Witbier – coriander is added to this kind of beer.

To the Freigeist Geisterzug Rhubarb Gose also fresh rhubarb was added in the creation process. So there is absolutely no sign of a “Reinheitsgebot” (purity law) to this bottle. But that does not really matter, since only natural products have been used. While the result may not necessarily suit very well for beginners, friends of sour enjoyments and fresh, unsweetened rhubarb (like myself) will get their money’s worth.

Freigeist Geisterzug Rhubarb Gose was manufactured by Sebastian Sauer in the Braustelle in Cologne and as you can see on the label, this beer is primarily intended for export to the English-speaking world (that may also be the reason for this all too stereotypical “Germanic” brand name). In Germany Craft Beer still has a long battle to fight and the cards are especially stacked against beers who are not brewed according to the “Reinheitsgebot”. Therefore, I consider myself very lucky to have the opportunity to buy Craft Beer directly in my home city of Bochum at the Trinkhalle (a very cool drinking place in the tradition of the Ruhr district).

On the nose apparent rhubarb can be scent, very fruity and even with a slight sweetness as of stewed rhubarb compote, also some yeasty notes.
On the palate you’ll find a strong sourness and also a clear yet very fine and natural rhubarb note, like a piece of fresh rhubarb. The Freigeist Geisterzug Rhubarb Gose has only a very faint sweetness while the finish offers some saltiness. The beer is slightly sparkling and in the finish you can also find a hint of coriander (with a little fantasy).

A pretty fresh and sour experience that is certainly only suited for people who do not mind a bite in a pure piece of rhubarb!

You may find the Freigeist Geisterzug Rhubarb Gose in specialized stores (eg in the Trinkhalle in Bochum) or online.

One thought on “From the Brew Kettle: Freigeist Geisterzug Rhubarb Gose”