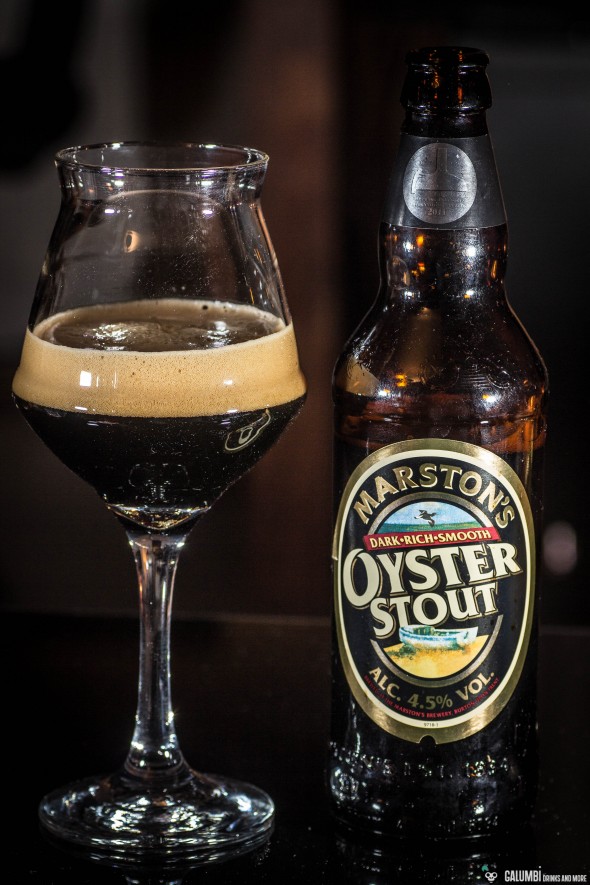 Don’t worry, this stout was not made by throwing the gelatinous content of a shell in the brew kettle during the brewing process, nor does it taste suspiciously like salt water or has to be flavored with Tabasco sauce; no, in the first place Oyster Stout is just a name suggesting a side dish for this beer. Well, my initial words are not so far-fetched as it might seem, because oysters actually were used in the production process of some stout beers in earlier times. So the Porterhouse Brewery in Dublin allegedly still uses oysters while manufacturing their own Oyster Stout. But Marston’s Oyster Stout, which I’d like to discuss todeay is also suitable for vegetarians as long as they stay away from following the side dish suggestion on the backside of the bottle.

Nevertheless, some Stout-lovers speak of Oyster Stout as a unique subcategory of this brewing style.

But what does it actually taste like? Without further ado I’d like to have a closer look on this (before too many people’s appetite might be spoiled by further thoughts of oysters):

The Oyster Stout enters the glas dark and aromatically with a not too high viscosity. The fragrance turns out to be full-flavored and relatively strong. When it comes to you can easily find the impression of the nose on your palate. It fulfills all initial expectations of a stout. But anyway, the Marston’s Oyster Stout breaks ranks a little bit and offers somehow nippy or fresh notes. It proves to be drinkable relatively easy. With its 4.5% vol. it’s not too strong, at least compared to its relatives, the imperial stouts, but also in comparison to other “regular” stouts: at the end of the day it’s rather based on the lighter side.

In short: The Marston’s Oyster Stout somehow is a slightly fresher one, without losing the typical features of that brewing style. While Stouts are usually more commonly associated with the colder season: This one will certainly also cut a fine figure on a beautiful summer evening.

Buying sources: At least in germany you might find this one only in specialized craft beer shops or have to order it online. In Great Britain of course the situation will be slightly different.