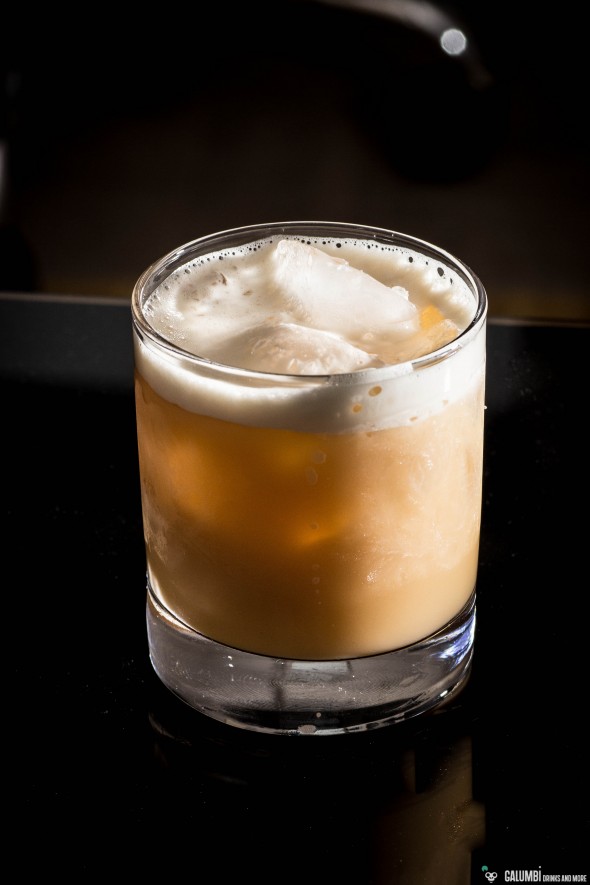 Smoky, earthy, with slight associations of cinnamon and a creamy sweetness. That’s the way Bramble’s Mezcal Flip will tempt you when waiting in a glass in front of you. A really recommendable flip whose origin is not Mexico (as one might think, cause mezcal is considered the national spirit and is, of course, also produced in that country), no, Bramble’s Mezcal Flip comes from the country of the green hills: from Scotland.

It was invented in the Bramble Bar in the Scottish capital of Edinburgh. Following the verdict of the jury of the Drinks International magazine, the Brambe Bar is the 32nd best bar in the world in 2014, making it the best bar in Scotland.

The Bramble’s Mezcal Flip works amazingly well while being really simple. The Angostura Bitters provide some additional depth to the cocktail that is somewhat settled on the sweeter side, although I would not describe it as too sweet. The velvet texture of the drink contributes to a very pleasant drinking experience typical for a flip.

I can just recommend recreating this drink at home or at a party! It can certainly be a good introduction to mezcal cocktails in general. In the original recipe Quiquiriqui Matatlan Mezcal is used, which you won’t probably be able to find in your close proximity (see below). If in doubt, another Mezcal will also do fine.

5 cl Mezcal (Quiquiriqui Matatlan Mezcal as stated in the original recipe, you can replace it by another mescal, see below)
2 cl agave syrup
1 fresh organic egg
1 dash Angostura Bitters

Combine all ingredients in a shaker with ice cubes together and shake vigorously for at least 20 seconds. Then strain on fresh ice into chilled glass.

Buying sources: As mentioned above Quiquiriqui Matatlan Mezcal is used in the original recipe. Depending on where you are based, it might not be able to get one of these except via the internet. But well-sorted supermarkets or liquor dealers will certainly help you out with some alternatives. It should be a smoky mezcal, which also is characterized by a pleasant sweetness. Although not really comparable to Quiquiriqui Matatlan Mezcal, if you’re in a pinch you can replace it with mezcal brands having the infamous worm in the bottle (eg Gusano Rojo). Among connoisseurs these mezcals are considered as relatively inferior in terms of quality, but in a flip it does not bring its full complexity to bear, so you will go fine with it (although you won’t get the intended result to a hundred percent).
Angostura bitters and agave syrup are also available in well-stocked supermarkets. The syrup often is available in health shops, too.