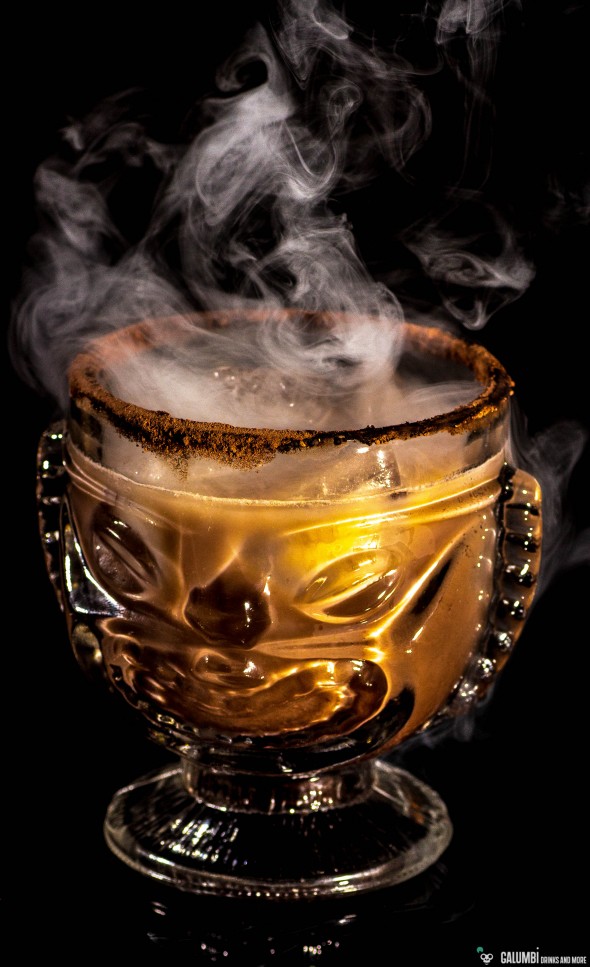 An explosion of chocolate, smoke and fire. To create this drink characterized by Mexican flavors, I was inspired by a classic: The Chocolate Cocktail.

The Chocolate Cocktail is a classic that has a great vogue in different versions. Commonly, it consists of an egg yolk, Chartreuse Jaune, port wine and cocoa powder or chocolate syrup. So you might be surprised that my creation, Chantico’s Chocolate, contains none of these ingredients but the egg yolk. Nevertheless, it’s based in principle on its famous role model: The function of the Chartreuse here is assumed by a significantly less sweet and smoky Mexican Mezcal. In place of port wine the classic aperitif Dubonnet is used and cocoa powder is replaced by a dash of creme de cacao. To give the drink extra depth and especially some fire, there are two different bitters used: The really recommendable Chocolate Bitters from The Bitter Truth series and the Bittermens Hellfire Habanero Shrub: “a hot sauce specifically designed for cocktails and other beverages “.

Mixed together, all the ingredients result in a silky cocktail with a full cargo of exotic flavors. It’s a reminiscence of the genesis of cocoa only with a clear smoky flavor: The Aztecs used to mix water, cocoa, corn, vanilla, cayenne pepper and a little salt and drank this mixture in sacred ceremonies. Although this version has not prevailed in the Old World, the name “cocoa” stands as a reminder to the eponymous Aztec God Xocoatl.

However the eponymist for my creation is not the God Xocoatl, but a different Aztec deity: the volcanic and hearth goddess Chantico. If a volcano goddess would order a cocoa, I’m sure it would taste like this cocktail.

A pinch of chilli and unsweetened cocoa powder for garnish

First, put chili and cocoa powder in a mixing ratio of 1: 5 and spread on a small plate. Moisten the rim of the precooled glass and rotate it through the cocoa-chili mixture, so that a cocoa-chili-rim is formed. Put all ingredients for the cocktail into a shaker and shake vigorously with ice for 20 seconds. Then, carefully strain into the glass without damaging the cocoa chili edge.

If you want to present this drink in a quite opulent manner, you can serve the drink in some kind of Aztec-themed tiki glass, ignite some cinnamon and sandalwood, “collect” the smoke under a container (such as a small sombrero) and “put” that container or hat carefully on the drink. Before serving “lift” the cover and smell aromatic smoke arising from the drink. I learned about this “trick” in the Artesian Bar in the London Langham Hotel (supposedly the best bar in the world at the time). It enhances the drink a lot but is of course not necessary.

Glass: Coupette (or tiki glass, in the latter case, serve over ice)