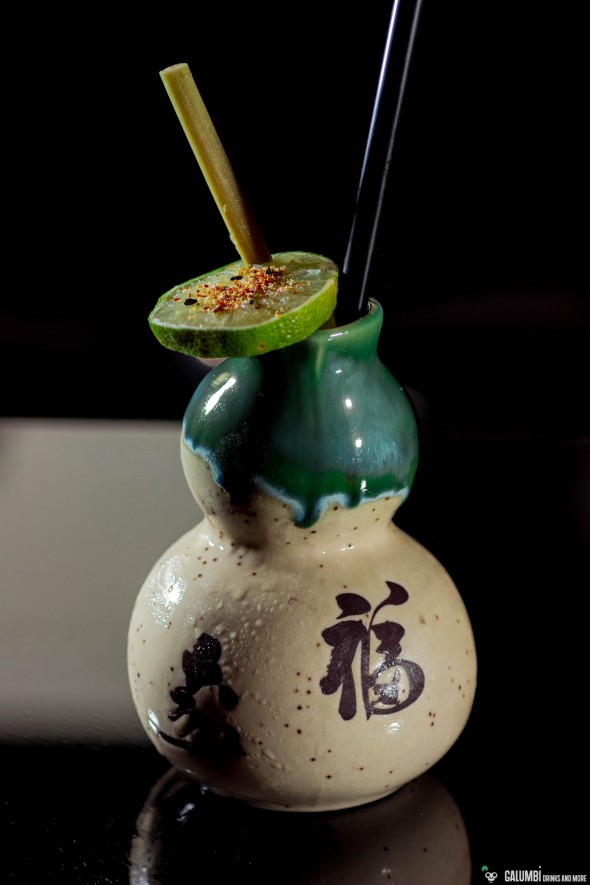 Today I want to write a few words about one of my own drink creations, about which I am very pleased so far: the Miyajima Pond. The idea for this cocktail came during a stay in the London Nightjar Bar while drinking a cocktail called “Little Entente” (I will also write a few lines about the Nightjar here in the near future). The “Little Entente” – although it is a distinctly different drink – offered a very nice combination of citrus flavors with a slight Asian touch.

I was experimenting around a little with Sake some time ago. For the Miyajima Pond cocktail I used a Honjozosake, but other versions are possible. The very subtle notes of sake, of course, change a lot in a cocktail and are covered to a large degree, so a very high level of concentration is required to bring special nuances out. But if you look for a well harmonizing Sake to use in that cocktail, you should choose less earthy or peppery variants and instead turn to the more floral and lighter versions. For the preparation of the cocktail in the photo I chose an Akashi-Tai Honjozo, which is a rather dry sake with citrus and straw aromas. It goes really well with the other ingredients.

I learned about the spice mixture Shichimi tōgarashi used in the drink for the first time on a trip to Japan. In Japanese cuisine, it can be used in many different ways and it is a very good example of the very subtle flavors of the country’s cuisine. In particular, the mandarin peel and the fine hotness of Sansho pepper are the parts of the spice mixture that work very well in the Miyajima Pond cocktail.

The Miyajima Pond is a drink with tart floral notes and complex bitter citrus flavors. The fresh, floral traits of gin and sake are an excellent companion to the citrus notes of lime juice, orange bitters, triple sec and lemon grass. As in a classic sour, ginger syrup forms a balance to the acid, which in turn, however, also adds a very interesting additional facet with the fresh spiciness of ginger. Embraced by white tea and spiced with a pinch of Shichimi tōgarashi the drink is accomplished.

The drink is named after a small and picturesque pond with one of those marvelous Japanese wooden bridges on the sacred Shinto island of Miyajima off the coast of Hiroshima. During our trip to Japan we stopped at this pond and were completely overwhelmed by the atmosphere that seemed like out of a fairy tale. That place was almost too breathtaking to be true. If someone would have served me a Miyajima Pond cocktail that day, I would definitely still be sitting on that island.

Split two stalks of lemongrass lengthwise and put into a hot cup of white tea. Let it rest there for at least 20 minutes.

Combine all ingredients in a shaker with ice and shake vigorously. Then pour into the precooled glass or a pre-cooled (and misused) Tokkuri carafe (as seen in the photo – Sake purists and tradiotionalists may forgive me).

Garnish: slice of lime and lemon grass (In the photo you can see that I have given a little extra Shichimi tōgarashi onto the slice of lime. That way you can to adjust the seasoning a little bite more to taste. Anyway, this is not necessary.)