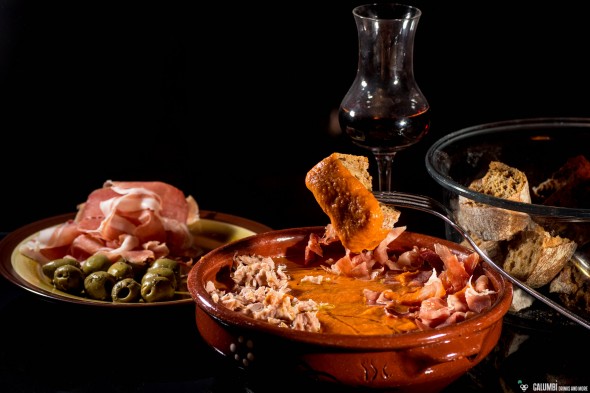 Porra Antequerana is a largely unknown delicacy in Germany from the Andalusian south of Spain. Although it seems this dish originates from the city of Antequera on the foot of the Sierra Chimenea, also the city of Archidona claimes to be the place of its invention. As with many specialties having gained widespread fame, the myth of origin is a controversial one.

Porra Antequerana is very closely related to the Salmorejo from Cordoba. Unfortunately, many do not know the Salmorejo, too. Salmorejo however is often compared to the world famous cold vegetable soup gazpacho. So Porra Antequerana seems to be some kind of cold soup, but even that’s not entirely true. And here it starts to become complicated…

The Porra Antequerana is actually not a real soup, but more of a very thick dip. In contrast to the somewhat more fluid Salmorejo it has a larger part of bread used in the preparation process (traditional “Pan Candela”: a rustic country bread). Salmorejo again is usually of higher viscosity than gazpacho. However, the latter contains paprika, which is not part of Salmorejo, but occurs in a Porra. All right so far? 😉

While in the past Porra stood for itself as a whole main meal for the agricultural community in Andalusia, it is now mainly served as a kind of intermediate course or appetizer. It is eaten as something comparable to a fondue (from a small terracotta bowl, a cazuela): Everyone dips small pieces of bread in the Porra, thus contributing to a convivial meal. To extend the range of tastes and add some regional ingredients, Porra is often served with Serrano ham, tuna and boiled eggs. But vegetarians or vegans may waive these ingredients and let their imagination run wild to find some alternatives.

For a small group of hungry people you’ll need:

If desired:
Serrano ham
boiled eggs
1 can of tuna

Crush the garlic with a generous pinch of sea salt in a mortar to form a paste. Then puree tomatoes, sherry vinegar, olive oil, paprika and the soaked bread (possibly retain a little bit of the water, should the whole thing fall too viscous, loosen a bit with the leftover water) in a bowl with an immersion blender. I recommend to use an immersion blender instead of a regular one, otherwise it can all end up in a big mess. Then cover the finished Porra and leave in the fridge for a few hours. This makes it much more aromatic.

To serve, pour in a small bowl (ideally a cazuela), serve with selected side dishes sprinkled on top and drizzle some olive oil over it.

On a hot summer day that dish is really fantastic. But due to the rich flavors for me it is also excellent in winter time (especially in the heartier version with smoked paprika). It goes well with fruity, vinous Cocktails (preferably variants based on sherry – for the Andalusian flair) or Craft Beer (for instance IPAs).