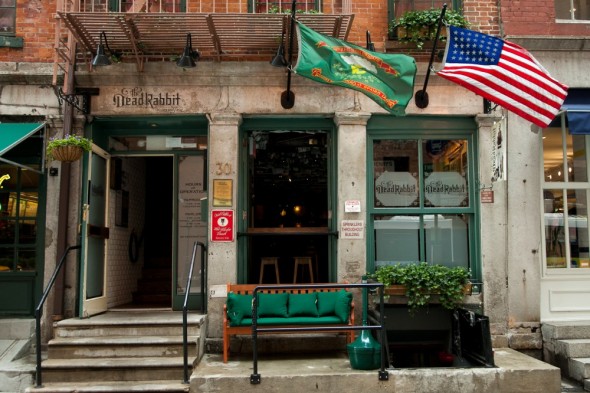 Who thinks of much acclaimed, high-quality bars as glamorous places, which were build up by interiors like the epitome of modern design will probably be radically astounded about the Dead Rabbit in New York City.

The Dead Rabbit is located in the Financial District in Lower Manhattan, in the far south of the island and at first seems not so easy to be found in the empty streets in the evening. At least that’s the problem we had as foreigners to NYC.  The region is not exactly known as a second Times Square in the later hours of the day. On the way there we passed rather deserted streets: Many bankers understandably do not stay here after work but flock to the notorious nightlife areas of New York …. or to the Dead Rabbit, as we should find out.

After we finally arrived at the Water Street number 30, we entered the – at this time – third best bar in the world (the “best bar across North America” in 2013). Such rankings are of course a highly subjective matter and should not be taken entirely serious, but at least you can be sure that a very high-ranked bar will have something to offer.

The interior of the Dead Rabbit (more precisely, the Taprooms, see below) surprisingly looked like an Irish pub. A really cool and quaint Irish pub. Well, considering how the Dead Rabbit is built up stylistically, this is actually not all that surprising, but since we had not done any research prior to our visit we were quite surprised. I must also confess: I love good (!) irish pubs. I must add: I like the whole pub culture in the Anglo-Hibernian cultural sphere. Most corner pubs you can find in the Ruhr Area of western Germany are a really sad reflection of those. A good irish pub is characterized by coziness, quaintness, a certain “common-people-flar” paired with Irish serenity, a good repertoire of Anglo-Hibernian beer- and ale-classics and plenty of traditional charm. The Taproom of the Dead Rabbits has to offer all of these. 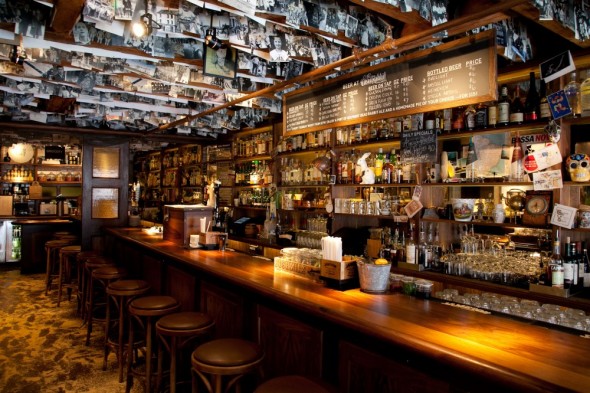 You enter an elongated tap room with bar on your right and suddenly feel like having entered a scene from “Gangs of New York”: The floor is strewn with sawdust and the ceiling is decorated all over with black-and-white photographs between wooden beams. Photos and old posters of the Irish immigration history in New York adorn the walls (including photos from the set of Gangs of New York, signed by Martin Scorsese). Behind the bar you can find all kinds of atmospheric trinkets between small cabinets, bottles of spirits and beers. It was noisy and crowded in this place, so it wasn’t easy to get a place at one of the tables or to find two free barstools. Most guests were still dressed in business suits and enjoyed some beers after work.

However, we were lucky to conquer two barstools (where I actually prefer to sit anyway, because from there you can watch the bartender’s during their craft) and took a first a look at the offer. They offer numerous beers and whisk(e)ys (which was to be expected), including some beer cocktails and also some high balls and mixed drinks. 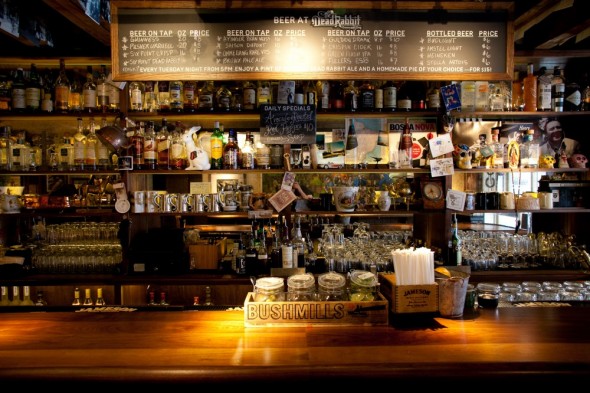 After a short investigation we found out that the Dead Rabbit consists of several rooms with different ambiances: The Taproom described above is still accompanied by a second Salon (The Parlor) upstairs.  This space is the actual cocktail-place of the Dead Rabbit: a salon in the style of the 19th century. It also built up in a traditional wooden style, but – without question – absolutely cool. There, the range of classic drinks on the menu is significantly bigger. In addition, the Dead Rabbit has a small Store (The Grocery) where lots of products for taking home are offered: jams, spreads, salt, sauces, etc. Besides that, also the culinary offerings in the Taproom and the Parlor are impressive: from refined snacks or oysters to ribs, stews and other classics they have a very broad range of delicacies to enjoy on-site. Each one sophisticatedly prepared and presented artfully. 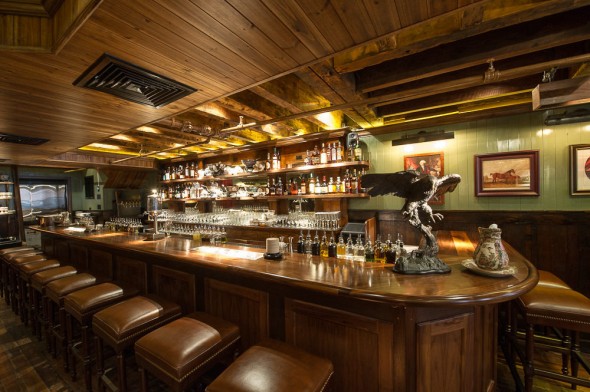 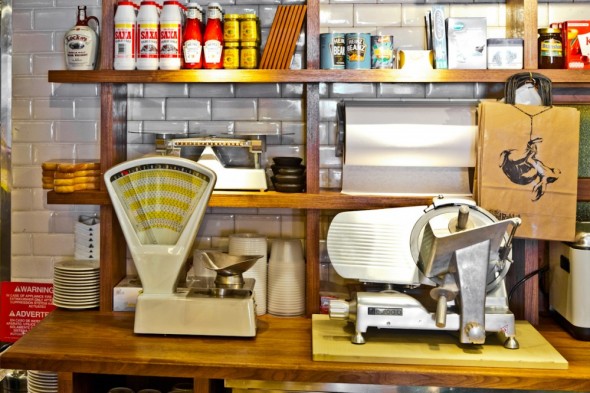 When it comes to drinks my wife and I had a Black Widow and an Old Mule Skinner. Both were perfectly balanced drinks that were not overly expensive at $ 14 (compared to other establishments of a similar reputation). The Black Widow consisted of Jameson Black Barrel Irish Whiskey, vanilla (I suspect some kind of homemade vanilla syrup), walnut (here I assume a walnut liqueur), honey, lemon juice & chocolate bitters. The overall result was a thorough drink with “warm” flavors somewhere between whiskey barrel, nuts and sweet fresh autumn desserts. The Old Mule Skinner came up with Old Forester Bourbon 100 Proof, yellow Chartreuse, papaya, lime juice, honey, and homemade Tiki Bitters what of course gave the drink a very exotic touch. Tikicocktails are actually not really my favorite, but I had watched the bartender while preparing one of these drinks for another guest and decided to have the same one, because I was really impressed by watching him. And what can I say? It tasted excellent!

Later in the evening I had a beer cocktail simply called pop-Inn, which consisted of a lightly hopped Peekskill Simple Sour ale and ginger liqueur. Pop Inns are a tradition dating from the 17th century, and have found a good preservative place in the tradition-bound Dead Rabbit. We would have loved to become preserved at the Dead Rabbit, too, but since we didn’t want to get drunk, we left the Dead Rabbit after about two hours and had a walk down the nocturnal Wall Street, which is within a comfortable walking distance from there.