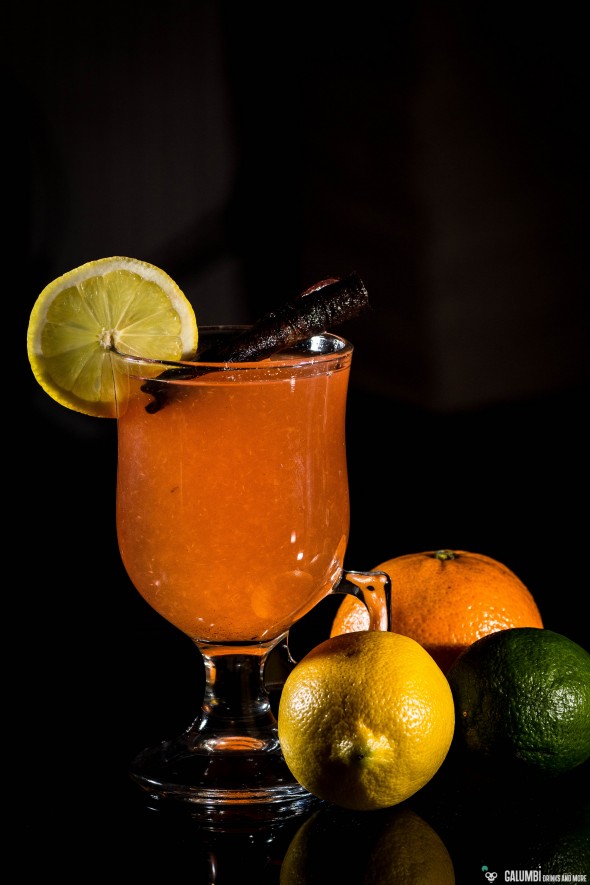 Who doesn’t know? When winter is coming a cold seams to breath down your neck. Whether you should drink alcohol in such a situation is certainly to be doubted. Many believe in a tea with a lacing of rum, but in the end alcohol weakens the immune system so I would never recommend to drink it as some kind of medicine.

Nevertheless, a Hot Bloody Citrus Toddy is a delicious winter cocktail. It’s just a modification of the regular Hot Toddy, which is based on whiskey, hot water and spices. The drink presented here stands shoulder to shoulder with the hot lemon. Although it’s not “healthy”, it’s still yummy!

The taste of the drink of course reminds a little bit of the hot lemon, but has much more complex citrus notes. The honey-whiskey-combination tops the drink off.

It’s preparation is quite simple and it’s sufficiant for two glasses:

Juice of one blood orange

Juice of one lemon

Juice of one lime

Put the two cinnamon sticks in a small saucepan and bring to the boil with a cup of water. In the meantime mix the remaining ingredients (except the honey) mixing glass. Then add honey and fill up with the cinnamon-flavored hot water and stir well. Spread the drink on two glasses and serve hot.