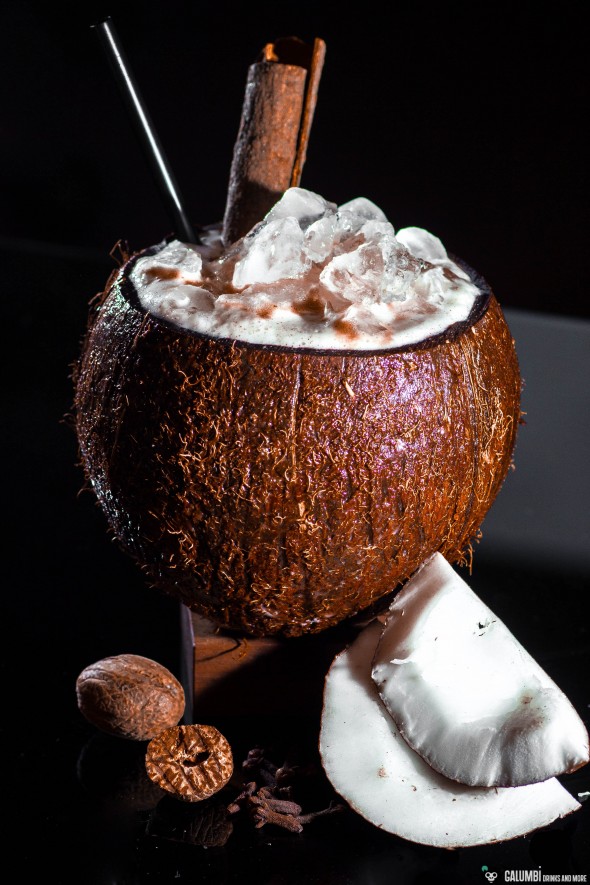 There are plenty of christmas cocktails out there. A lot of them are really originally created for this occasion and are – based on their regions of origin or the cultural context – served on Christmas Eve. The cocktail I’d like to present here originates from Puerto Rico where it’s also mixed in at Christmas time. In the recipe I tried around a little bit and came to a unusual varation of the original drink using soy milk. The slightly bitter and herbal taste works great with the fresh coconut and the coconut milk. In addition it prevents this eggnog-cocktail (what it actually is) from too much drifting away towards an alcoholic milkshake.

Of course the opportunity arises to serve the cocktail in a coconut shell. If you don’t have any prepared one at home simply do it yourself! The trick is to open the coconut with a saw to get a small lid out of it. The subsequent process of separating the coconut meat from the shell can be a little tough, but you can really make it easier by putting the coconut into the oven (something around 200°C) for about 10 minutes and afterwards cut it out with a sharp-edged spoon or knife.

My own interpretation on the famous Puerto Rican Christmas cocktail:

Shake everything on ice and pour (without straining!) everything into the coconut shell. At last sprinkle 3 dashes of The Bitter Truth Chocolate Bitters on top of the drink.