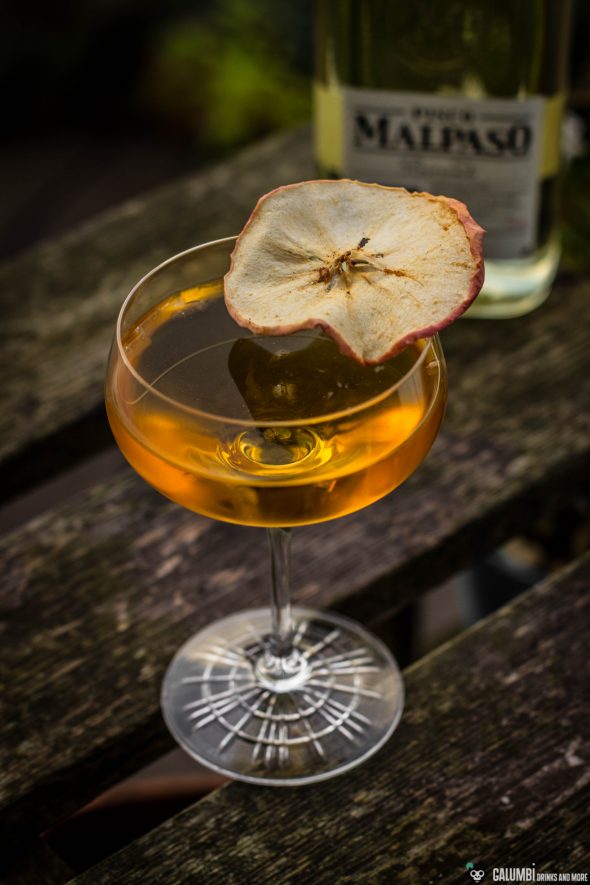 The Peruvian and Chilean spirit Pisco is often subject of forecasting. Sometimes it’s the rising star among the bar ingredients, sometimes it’s more of an insider’s tip, sometimes it’s the next big trend – but whatever may be the case, Pisco gathers a remarkable community of people behind it; also outside the two South American states. Unfortunately, at least in Europe this is not expressed in a large range of available brands. (provided test product)*

However, this is changing. And with today’s article I will deal with a product that will push Pisco further in a positive direction – or at least wants to do so. I am talking about the Chilean Pisco Malpaso Reservado. It is available on the German market since a very short time and therefore deserves a closer look. Pisco is made from grape must (which distinguishes it from a grappa made from grape pomace). In Chile there are – depending on the alcohol content – the Pisco categories Pisco Especial with an abv of 35%, Pisco Reservado with an abv of 38-40% and Gran Pisco with 43% vol. or more. With its abv of 40% the Pisco Malpaso Reservado belongs to the category Reservado (who would have guessed it…). 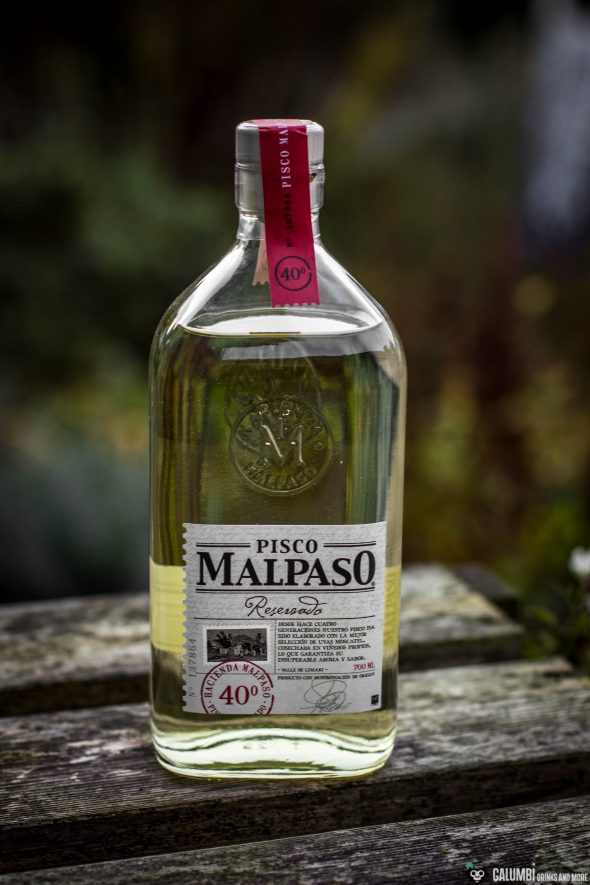 The Malpaso Pisco is named after the Hacienda Malpaso in Valle Limarí, which is now operated in its fourth generation and produces Pisco from white wines of its own cultivation. One quarter of the Malpaso Pisco Reservado is based on the Moscatel Alejandría grape variety, which is used for the majority of Chilean Pisco production. Another quarter is provided by the Moscatel Amarilla variety and the remaining half by Moscatel Rosada grapes. With this composition, the Pisco Malpaso definitely stands out from the broad mass of Chilean Piscos.

After distillation, the Pisco is first stored for three months in stainless steel tanks, before it is “divided” into American white oak barrels and French oak barrels. The duration of that maturation process is something between 60 to 90 days, finally the cellar master of the Hacienda Malpaso decides with each batch how long it should actually take. Finally, the Pisco is diluted to a drinking strength of 40% vol. and stored again in a steel tank for a few days. 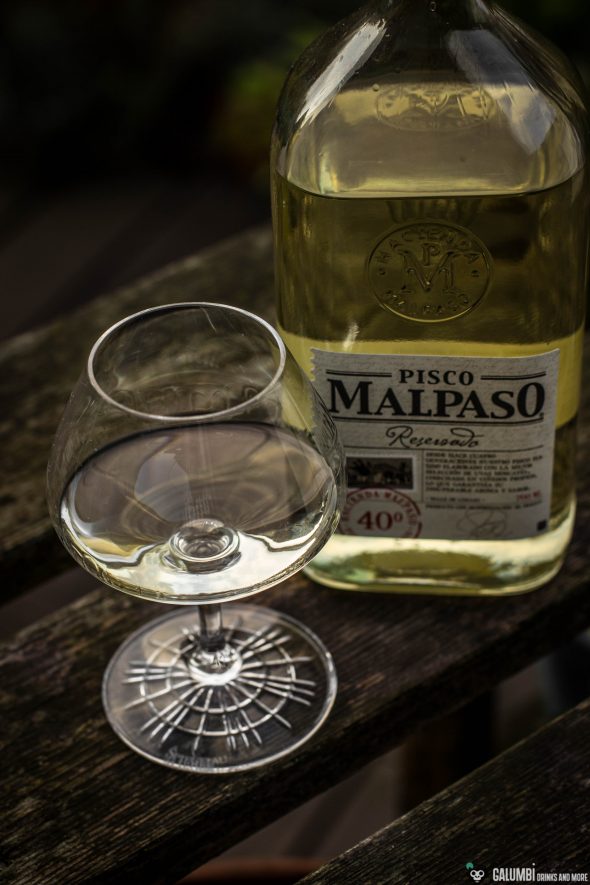 Aroma: Oh wow, this is different from the Piscos I have tried so far (which were mostly Peruvian). The white wine character is unmistakable, with a fine, fruity acidity it brings directly associations of green grapes, lemon balm, a mild honey and white peaches. I also find some pear, lemon peel and spice cake. A great aroma!

Taste: The taste of this Pisco is surprisingly different. I had expected a much fresher taste given the aroma, but in fact it turns out very balanced, I almost want to say: “adult”. I can find an overripe pear, green grapes, spice bread, greenish-woody notes and a very subtle honey. Over time, more and more sweet associations come through that make me think of a dessert wine, but also of a Greek Retsina. Subtle herbs (again associations of lemon balm) and also some apricot introduce the finish.

Finish: relatively dry, but persistent and complex with fruity notes of peaches and pears, fine and spicy. 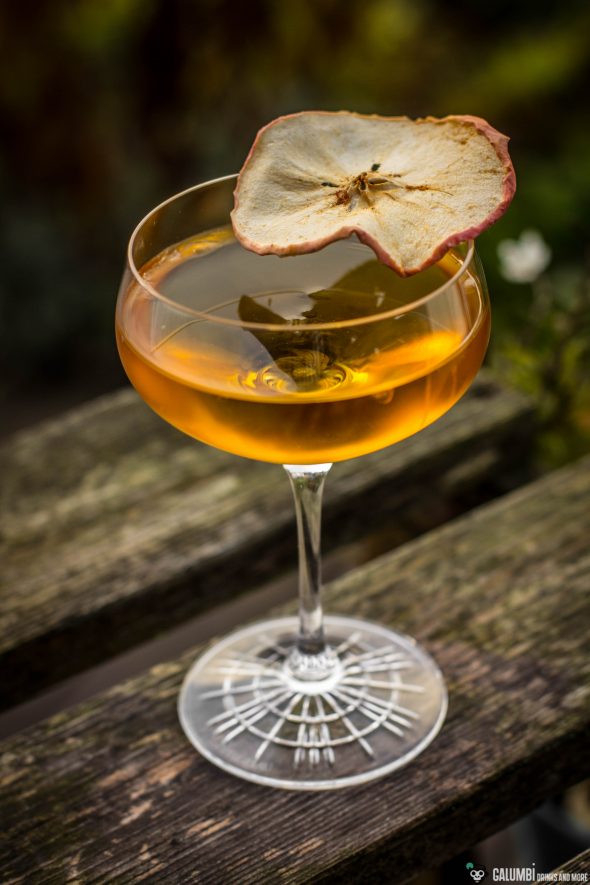 When it came to a cocktail, I was inspired by a drink that I tried a long time ago with a Peruvian Pisco. The cocktail was called Velvet Threesome and was invented by Simon Difford in the Cabinet Room, London. However, I was not really satisfied with the result at that time (its a good drink, no question, but it required water for dilution and was a bit too much for me due to a considerable amount of Licor 43). But what I have adapted is the combination of Pisco, Calvados and Cognac, which I find very exciting. Nevertheless, in my drink there is no vanilla liqueur at all and the proportions were also changed. Nevertheless, I named it after my source of inspiration: Velvet Curtain.

Preparation: Stir all ingredients until cold in a mixing glass on ice and strain into a pre-cooled glass. 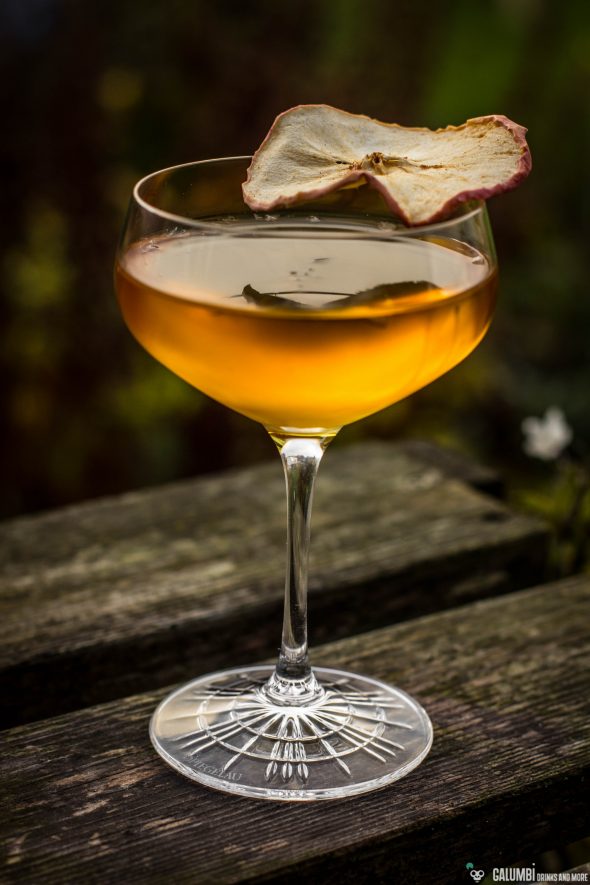